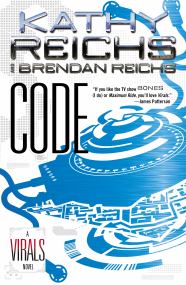 Code is a suspenseful page-turner, a mystery, an insight into relationships, a series of intellectually challenging puzzles based on science, and random thumbnail explanations of things like how to balance a chemical equation. Most of all, this book tells of the harrowing, life-or-death struggle of three teenagers who must find a bomb before its scheduled explosion. Toss in a hurricane and an evil mastermind who glories in destruction, and it’s understandable how the thrills and chills are packed in back-to-back.

In two earlier books in the Virals series, Tory (the only girl), Hiram, Shelton, and Ben (the oldest at 16) and Coop (the wolf dog) had previously been zapped by a designer pathogen that imbued them with special super human (and super canine) powers. By simply concentrating, these kids can summon extraordinary strength and heightened sensory awareness.

Their newest adventure starts as an innocent game of geocache. Hiram is digging to find the cache that he’s located using GPS. He explains to his friends that gamers hide these caches for each other, just for the challenge and fun of finding them. There’s no intrinsic value to an individual cache, and the finder simply re-buries it for the next player. All that would be true if this was an ordinary game.

Immediate clues suggest that this is not an ordinary game. The cache is an ornate, expensive-looking box that can only be opened by solving a puzzle. Inside the box, there’s a cipher that Shelton manages to decode.

The first geocache offers tantalizing clues that lead to a second, more enticing geocache. The Virals swallow the bait laid out for them by The Gamemaster. They pursue the second cache, which contains a fake bomb and a chilling proposal. By the point in the game that they realize that the Gamemaster is a heartless killer, they are too embroiled in his master scheme to extricate themselves. Their only option is to piece together the clues that will lead them to the bomb before it explodes. The “bomb” turns out to be a container of poison gas that is set to infiltrate the air conditioning system. Unless the Virals can prevent the gas from escaping, everyone in a crowded building will die.

Although Code is the third in the Virals Novel series (the first two are Virals and Seizure), it stands totally on its own. The authors include some background on how these kids obtained their special powers, and how they have worked together in the past.

For readers who want to know more about the geocache game, The Official Global GPS Cache Hunt Site is www.geocaching.com

According to www.Wikipedia.com, the first geocache game was played in May, 2000. Now geocache is played throughout the world.

Fredericks, Mariah. The Girl in the Park. Schwartz and Wade Books, 2012.