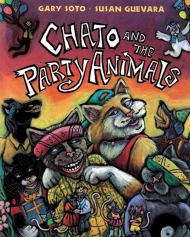 Party animal Chato, the coolest cat in el barrio, is having a great time at the neighborhood birthday party that the mice next door are throwing for Chorizo the dog. They play shake-paws, jiggle-the-mice, and toss-the-cat-in-the-blanket. Chato's best homecat, Novio Boy, doesn't seem to be having fun. Are those tears in his eyes? He opens up to Chato, telling him, "I'm from the pound . . . I didn't know when I was born. I never knew my mami. I never even had a birthday party, or nothing."

"Pobrecito," Chato says sympathetically when he gets home, thinking about his poor friend, and decides to throw together a big surprise bash, a pachanga, for his carnal. He orders a large cake with mouse-colored frosting from the bakery, makes a piñata, and cooks up his specialty, tortillas with his pawprints pressed in. He drags the sofa outside for everyone to jump on, and hides dog bones in the flowerbed. All the neighbors show up, ready to party. There's only one little thing Chato has forgotten to do: invite the guest of honor. "Qué tonto!" (How dumb!) he says, but when the guests can't find Novio Boy in his usual hangouts, they conclude he must be dead.

Spanish words and expressions are integrated into this hip, zesty sequel to Chato's Kitchen, and there's a glossary of all of them at the front, though it would've been nice if they'd added a pronunciation guide. The vibrant illustrations of acrylic and scratchboard dance with color and the rich flavor of the animal-infused Mexican American neighborhood. You'll love hanging out with marmalade and white-furred Chato, sartorially spiffy with his pencil thin black moustache and little goatee, his green baseball cap turned sideways, and his velvet black sports jacket with purple paisley shirt.