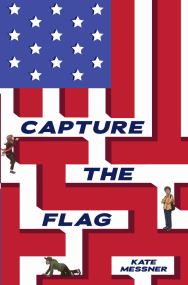 Three kids, strangers to each other, are stranded in the Washington, D.C. airport.A monster blizzard cancels flight after flight and makes it impossible to enter or leave the area.

Anna, a seventh grader, is a relentlessly-aspiring journalist.She is after every interview and scoop she can find. When the airport newscast announces that the original “Star Spangled Banner” has been stolen from a locked and guarded vault in D.C., Anna is convinced that the thieves and the flag are stranded in the airport, just as she is.

Jose, whose mother has been working for months to restore the flag, is reluctant to join Anna in the search. He would rather read and re-read Harry Potter and research famous philosophers. Henry, who is also reluctant, would prefer to play video games.Anna appeals to their sense of justice, and the race is on to find the flag before the airport re-opens and the thieves fly away.

Once the action starts, the three children are swept up in a pursuit that becomes increasingly dangerous and complicated. It begins with riding the conveyor belt through the suitcase chute, and sneaking into the cavernous baggage area.Anna is hiding behind a giant suitcase when she discovers the thieves unpacking the precious flag. To her horror, they desecrate the dignified 200-year-old flag by tearing off a piece of it.She records their conversation and their despicable actions. Then she accidentally drops the camera. A wild and frightening chase ensues.Anna, Henry and Jose return to the baggage area to find the camera, lucky to get out alive but unlucky because they didn’t find the camera.

The kids need help, but as hard as they try, they can’t get any responsible adults to believe that they have identified the thieves. In the meantime, the bad guys are planting evidence and having innocent people arrested.

Back to baggage. This time, Anna escapes with the camera, only to be apprehended by a bad guy with a knife. Henry rescues Anna and the camera and the incriminating evidence by clobbering the bad guy with a golf club. Only to be caught by an even bigger, badder guy.Meanwhile, back at the departure terminal, parents are frantically looking for their children so that they can board their flights.

Just when it seems the bad guys have pulled off their heinous heist, huge Hammurabi (the dog) leaps from a crate and licks the bad guy until he lets go of Anna.

The kids with their evidence run back to their parents. Mystery solved. Bad guys arrested. Kids vindicated. All’s well that ends well. Especially when the end is the beginning of a new series featuring these same smart and funny kids.