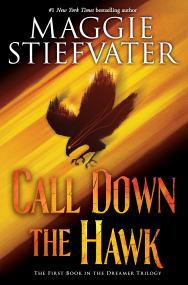 Call Down the Hawk

CALL DOWN THE HAWK is a spin-off of Maggie Stiefvater’s Raven Boys series and follows the events of THE RAVEN KING. While Blue and Gansey have gone on a cross-country road trip and Adam has gone to college, Ronan remains alone in his childhood home. Ronan is a dreamer, which means he can materialize objects from his dreams into real life. Ronan’s powers were explored extensively in the Raven Boys books, but there is obviously a lot more to see, and that is where this new series comes in.

There are three new major characters introduced in this book: Carmen Farooq-Lane, Hennessy, and Jordan.

Farooq-Lane is a hunter of dreamers. The world is supposed to end at the hands of a dreamer, and she and her team are trying to hunt down every dreamer, including Ronan, to save the world.

Hennessy is a dreamer just like Ronan, and Jordan is Hennessy’s clone who she brought back from a dream. Every time Hennessey dreams, she brings back another copy of herself, and each time she does, she gets weaker. She is convinced she is going to die soon, so she does everything in her power to stay awake.

Ronan didn’t know there were other dreamers out there, and he also doesn’t know there are people who want his kind eliminated. Waiting for all three characters’ stories to overlap drives the narrative and makes for an extremely compelling read.

Fans of the Raven Boys will be happy to see the return of some of their favorite characters, including Adam Parrish. In addition, Ronan’s brothers, Declan and Matthew, are given big spotlights in CALL DOWN THE HAWK which allows for a lot more character development than they got in the original series. Declan is actually one of the most interesting characters in CALL DOWN THE HAWK, and it is nice to see him face his own challenges.

For very good reasons, readers are often wary of spin-offs of their favorite series. However, you can be assured that Maggie Stiefvater knows exactly what she is doing. She maintains her exceptional and magical writing technique and expands the Raven Boys world in a unique way that fans of the original series will eat up. While you don’t have to have read the Raven Boys series to read this, it will definitely enrich your experience because you will better understand the backstories of the characters and plot. Regardless, CALL DOWN THE HAWK is a must-read for lovers of magic and extraordinary storytelling.