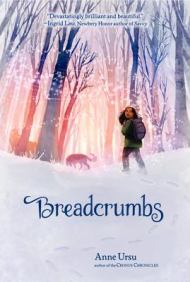 In this novel based on Hans Christian Anderson’s The Snow Queen, the real magic is in how Anne Ursu shapes a distant classic winter favorite into a beautiful, thought-provoking contemporary tale, while enhancing the richness of the message, imagery, and characters.    The book asks readers to consider the lengths they would go to save a friend who is lost.

Main character Hazel does not fit in.  She is creative and imaginative, and she doesn’t like to follow the rules. And, because she is adopted, even her appearance makes her stand out as different.  The one place she feels she does belong is with her best friend Jack.  She and Jack avoid their problems at home (Jack’s mother suffers from depression and Hazel’s parents are recently divorced) and bond over comics and snowball fights.  When a sliver of magically-evil glass gets in Jack’s eye, things change as he starts to see the ugliest side of everything. The Snow Queen lures Jack into the woods with a promise of escape from the difficulties of life, and he accepts.

Hazel decides to make the daunting trek into the woods to rescue Jack, despite the unknown dangers and the fact that she’s not even sure Jack wants to be saved. Hazel runs away from home with nothing but her backpack and the few meager supplies it contains.  She quickly realizes she may be in over her head when she meets a boy whose sister has been turned into a bird, a woodsman who offers her dancing shoes (that never stop dancing), and a nice couple who try and keep little girls safe by turning them into flowers stuck forever in their garden.  When Hazel finally reaches Jack , she sees that he is under the Snow Queen’s spell.  He lives for her seldom and minimal praise until Hazel is able to break through his frosty exterior and rescue him.

Throughout the story both Jack and Hazel are tempted by opportunities to take the easy way out.  Everyone back home tries to convince Hazel that Jack doesn’t need saving; they tell her that he has gone to stay with his aunt. But Hazel persists.  During her long trip to find Jack, she is tempted to give up and make a new home at various stops along the way – places where she might fit in better than she did back home, but she fights the urge to stop.  In the midst of the ice-numbing cold, she is tempted to rest and let the cold overtake her, but she is able to stick to the path to not only save her friend from the Snow Queen, but also from his own apathy.

If your reader is a fairy tale fan, he or she will notice lots of details that reference other tales; there are wolves and a Woodsman, Dancing Shoes, and even some elements from Narnia, adding the dimension of a treasure hunt for fairy tales to the book. And if this is the first book of its kind your kiddo has ever picked up, they will be swept up in the adventure and magic of it all.  This is a wonderful story about friendship and about finding your way told through vivid descriptions, powerful metaphors, and imaginative characters.  Sure to be one read that sticks with your reader.