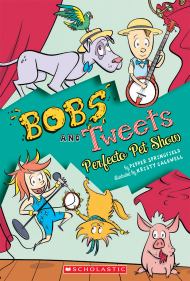 Having read and reviewed the first volume of Meet the Bobs and Tweets for this site I was eager to get my hands on the 2nd volume and continue the kooky adventures of these mismatched neighbors. As a quick catch up much of the action centers around the exploits of the Bobs (brothers who live in the neighborhood and are notoriously messy/destructive) and the Tweets (their female neighbors who, you guess it, are amazingly neat/productive). Each family is highlighted by one outlying member Dean (for the Bobs) and Lou (for the Tweets) who are who struggle to fit in with their neat/messy siblings, but have nonetheless formed an unlikely friendship.

Pepper Springfield (author) and Kristy Caldwell (illustrator) again combine talents to deliver a brisk, energetic read. Pepper’s tightly rhymed pages keep the story interesting and the reader sharp. Kristy Caldwell again succeeds in turning each page into a canvas of intricate detail that never gets distracting by rewards a second and third reading as you get to explore the tiny chaotic details of the Bobs and Tweets world. Just like the first volume we have to applaud the collaboration here, the image/text collaboration always feels additive to the end product, moving us along the quickly paced narrative, but always enough substance to pause and observe and enjoy each individual page on it’s own.

The one big question I had when diving into the second volume was if they could interject new ideas and challenges into the series beyond the scope of the central issue. Dean and Lou have developed a genuine friendship because of (not in spite of) their differences and willingness to communicate, cooperate, and compromise. But now what? Well I am happy to say that Springfield and Caldwell do a fantastic job of opening up the world of the Bobs and Tweets in this 2nd volume, introducing their school on Bonefish Street as well as a number of secondary characters such as a per-loving teacher, several new classmates, and important folks in the town. I won’t spoil the surprises in store at the Perfecto Pet Show, but we thought it was as delightful and humorous as the first volume, maybe even more so.

With so many new and interesting characters and settings making their debuts in this 2nd volume, it has my family and me looking forward to what will be explored in later volumes as the series moves it’s dual-protagonists outside of their family units and into the world. The themes of friendship and cooperation, and acceptance still hold true here, but it is great to see them applied to relevant situations in the real world as opposed to just the siblings we saw in the first volume. In short it was another great and illustrative collaboration between Springfield and Caldwell that left us wanting to know what is next for the Bobs and Tweets!