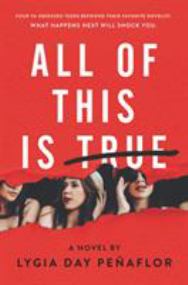 All of this Is True: A Novel

All of This is True joins the ranks of One of Us is Lying by Karen M. McManus and We Were Liars by E. Lockhart as a new brilliant psychological thriller. In this suspenseful book, author Lygia Day Peñaflor weaves a tale that is page-turning to the max and often times will make you gasp out-loud.

The story centers around four friends and their obsession with a young-adult fiction author. Miri, Soleil, and Penny have all been friends and trendsetters at their private school for years. Soleil then befriends Jonah, a mysterious and attractive transfer student. The girls all can’t stop talking about young adult novelist Fatima Ro, who herself is only twenty-two.  They’ve idealized her debut novel Undertow and attend a book signing where Fatima exceeds their expectations. They start to build a friendship with her and are ecstatic at the opportunity to be in Fatima’s presence. Jonah also then reads Undertow and finds in it a deeper connection to his traumatic past.

As the friendships with Fatima deepen, each teen feels connected to her for their own secret reasons.  Miri is the ringleader and assertively pushes Fatima’s message of making real human connections, no matter the cost. Penny is sick of only being seen as an unintelligent party girl, with a big fancy house. Fatima’s attention makes her feel special and she will stop at nothing to keep that feeling. Soleil dreams of becoming a writer like Fatima and hangs on her every word. However, the person with the most to gain (and lose) is Jonah. He had transferred schools for a second chance after harboring a huge secret. Jonah was good at remaining anonymous, that is until Soleil comes into the picture. When Fatima however uses all these new relationships as the basis for her follow-up book, no secrets are safe any longer.

All of This is True stands apart as it is told through a series of interviews, journal entries and even excerpts from Fatima’s second novel. Peñaflor intertwines an intricate story that gets more and more dynamic as truths start to unravel. The switches between the fictionalization of Fatima’s book, within the real book, and the consequences everyone faces is done seamlessly.

For a fast-paced shocking novel, that is also filled with important themes of friendships, social class, truth and forgiveness, All of This is True is the perfect read!

A Flicker in the Clarity

Questions I Want to Ask You

Here So Far Away