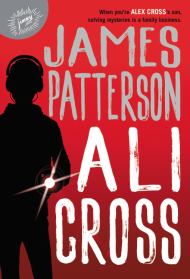 Alex Cross is a legend in the world of adult mystery and crime fiction. He’s solved all kinds of cases and has made a name for himself in his own community and worldwide. In this middle grade novel, Alex Cross’s son, Ali, gets to solve his own mystery. His friend, Gabe, has gone missing, and since Ali knows Gabe better than anyone, he decides to do his own investigation.

Ali Cross knows a lot about being a cop from his dad, and he’s also an avid fan of crime television. He understands the dangers of what he gets himself into, but he’s bold and stubborn like his father, so he goes through with everything anyway. His intelligence, determination, and humor make him a great narrator for a story like this.

The book is written in the fast-paced, short-chaptered style James Patterson is known for in his adult thrillers, and it works very well in this story. The mystery is compelling and thought-provoking; don’t think that just because this is a kid’s story that you’ll be able to solve the mystery easily. The plot is constructed brilliantly and will keep you guessing about what happened to Gabe until the very end.

Aside from the mystery, the characters completely make this book. Ali’s friends, Cedric, Ruby, and Mateo, join him in helping find Gabe. They are a group of diverse, interesting, fun-loving friends who add so much fun to this story. They are all obsessed with Outpost, an open world online video game similar to Minecraft where players can build things and interact with others. It ends up being an important part of the mystery in a creative way.

It goes without saying that Alex Cross fans will enjoy this book, but you don’t have to have ever heard of him to enjoy the story. He does narrate some of the chapters and goes through his own conflict during the events of this book, but he is presented in a welcoming way to new readers. The end of ALI CROSS is set up nicely for a sequel, and you’ll be left with a desire for more mystery solving from Ali and his friends. Who knows, maybe Ali Cross will end up being an even better crime solved than his dad one day.

“The prolific king of the beach read is back with an intergenerational mystery for the 9-to-12-year-old set.”―Kirkus Reviews