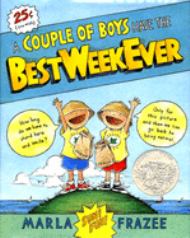 A Couple of Boys Have the Best Week Ever

James and his friend Eamon spend a week at the beach with Eamon's grandparents, Bill and Pam, so the boys can attend nature camp together. Each day Bill drives them to camp where they seem underwhelmed by the activities. Since this story focuses on the stuff they do at Bill and Pam's, you'll need to look at the snapshot-like stills on the endpapers to see them at camp, doing crafts, hikes, cloud-gazing, and goofing off together. Back at the house, Bill, an Antarctica buff, really wants to take the boys to the penguin exhibit at the Natural History Museum, but they'd far rather stay home, watching TV, eating coffee ice cream icebergs, playing video games, sleeping on a blow-up air mattress, and eating Pam's banana waffles with maple syrup. ("The food is way better here than at my house," James says to Eamon. "Mine, too," he says back.) On their last night at the beach, the boys—Bill calls them Jamon—finally venture onto the back deck where they make a model of Antarctica, replete with white rocks for icebergs, brown rocks for whales, and little mussel-shell penguins, to surprise Bill and Pam and it's "the best part of the best week ever." The illustrations are full of whimsy and humor, with yellow dialogue balloons and a deadpan narrative that capture the carefree charm of those two little boys.

You'll love the portrait of the four characters on the back cover: two barefooted, joyful, round-headed pipsqueaks, and two oldsters: Bill ("Do you like penguins?") in big shorts and a white walrus mustache, and white-haired Pam ("Are you hungry?"), holding a platter of banana waffles. Jamon have (has?) such a grand time doing nothing special, and you know it's a week they'll remember all their lives. The back flap confirms what the dedication says—that Marla Frazee based the book on real people and events (including her own son, James). You'll also find directions on how to make those cool little penguins out of mussel shells and little white rocks. Read an interview with Marla at www.harcourtbooks.com/coupleofboys/interview.asp. Your kids can draw and tell about their best weeks ever.