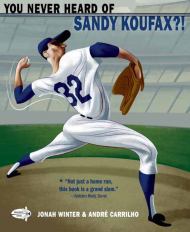 You Never Heard of Sandy Koufax?!

Trying to get a young sports-fan into reading? This has to be the coolest-looking sports biography ever. Catch the plastic-lined lenticular cover with three shifting views of Sandy Koufax pitching. Feast your eyes on the silver-gray graphite illustrations, bursting with movement, with red lines highlighting the blue and white Dodgers uniforms, and shiny copper baselines and equipment. Try to figure out the enigmatic Koufax from the moody portraits, all shaggy eyebrows and shadows. The Dodgers may have moved to Los Angeles in 1958, but the narration is pure Brooklyn, recounted by an unnamed narrator and teammate with attitude.

For six years, 1961-1966, Koufax was known as the greatest lefty pitcher ever. Pittsburgh Pirates Hall of Famer, Willie Stargell, said, “Hittin’ a Koufax fastball was like tryin’ to drink coffee with a fork.” In high school, this Jewish kid from Brooklyn aced every sport, and soon the scouts came calling. Signed to the Brooklyn Dodgers, “ . . . this nineteen-year-old squirt was . . . earnin’ more dough than some of us old-timers.” It took him six years of undistinguished playing before he hit his stride, throwing four no-hitters and breaking the National League Records for Strikeouts, though his elbow would swell to the size of a grapefruit after each game. In the first game of the 1965 World Series, he sat out the game since it was also a Jewish High Holy Day. And then, at the peak of his game, after the 1966 season, he retired, unwilling to lose the use of his arm.

“Yessir, folks are still scratchin’ their heads over Sandy. For six years, he put us all in a trance—teammates, batters, fans. In those split seconds when he arched his back and stretched his legs across the mound, his arm about to whip the ball into another world, he was like the Greek god of baseball.”

What a spectacular read-aloud this is. When you finish the book, you’ll want to see him pitch. (On YouTube, you can find footage of his unbelievable technique.) You’ll want to pitch. Take the kids out and play some ball. Talk about the prejudice he and Jackie Robinson faced and how they dealt with it.