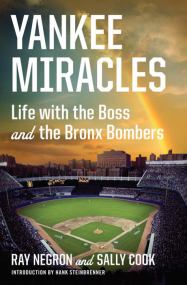 The most storied team in baseball history has a few tales that even the most die-hard Yankees fans might not know.

When Ray Negron, a teenager with a love of baseball – and more specifically, a love for his hometown New York Yankees – gets into trouble at the stadium, his first thought is that he’s going to jail. However, the new Boss, George Steinbrenner, offers him the chance to work off the price of his vandalism as a bat boy instead of reporting him to the authorities. And Ray’s life changes forever. He finds a purpose and ends up spending the greater part of the next forty years in the clubhouse of the Bronx Bombers.

Throughout his tenure with the Yankees, Ray saw some of baseball’s greats come and go through the clubhouse. From the likes of Reggie Jackson – Mr. October himself – to modern-day superstars Alex Rodriguez and Derek Jeter, Ray worked with them all as they touched lives both on the field and off. Ray watched Reggie Jackson hit three homeruns on one chilly night in 1977 to win the Yankees a World Series crown for the first time in fifteen years. Ray also saw the triumph of Brett Gardner’s inside-the-park homerun – a remarkably unlikely feat – which came just after Ray organized a children’s hospital visit with Brett where a little girl asked him to hit a homerun for her. As only can happen in miracles, the next day the little girl received the heart transplant she had needed for months. Ray also tells the story of Alex Rodriguez giving back to the Bronx community when he donates both money and his time to help out a local little league organization.

Fans of baseball will like this book of Yankees miracles as Ray tells his inspiring story of how one man – the Boss, George Steinbrenner – changed his life forever and by doing so, allowed him to change the lives of so many more with the help of some of the New York Yankees’ greatest players.