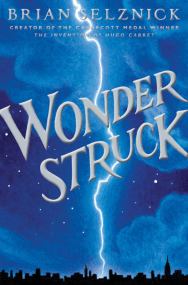 Don’t judge this book by its width. Wonderstruck may be 600-plus pages, but it’s very reader friendly, because far more than half the novel is told in pictures. Selznick interweaves text and illustrations to actually tell two stories about a pair of hearing-impaired children, growing up half a continent and 50 years apart.

Ben is 12 in 1977; his story is told mostly in words. Rose is about the same age, but it’s 1927 and what readers learn about her, initially, is only what they can infer from black-and-white pencil drawings.

The narrative unspools like a ping-pong match, beginning with Ben who lives with his aunt and uncle in Gunflint Lake, Minnesota, and is grieving over the loss of his mother, who died in a car accident three months earlier. Ben has never met his father, but has reason to believe he lives in New York.

Next, the reader meets the equally unhappy Rose, whose movie star mother has remarried, leaving her daughter with her ex-husband across the Hudson River in Hoboken, New Jersey.

Both children run away to Manhattan seeking their absent parents. Key scenes occur inside the American Museum of Natural History, where Ben makes a friend and Rose, as an adult, has a special interest in one particular diorama. (Those who have read From the Mixed-up Files of Mrs. Basil E. Frankweiler, also set in one of Manhattan’s most elegant museums, will enjoy hunting for the references to that classic sprinkled throughout Wonderstruck.)

The careful reader will find parallels between Rose and Ben's stories, but Wonderstruck is the kind of book that keeps the reader off-balance. For several hundred pages, you might be asking, “How in the world are these two stories connected?” When the strands finally converge, they do so in a satisfying way.

And though Wonderstruck looks like a doorstopper, it moves quickly, because so much of the story is conveyed visually. Ben, born deaf in one ear, loses his hearing completely early in the story and must find graphic ways in which to communicate – he uses a lot of notes. Information about Rose’s life is gleaned from the titles of books she carries, postcards on her bedroom bulletin board, signs, scrapbook clippings, and posters. It’s amazing how much story can be conveyed without prose. Kids who enjoyed Selznick’s last book, the Caldecott Medal-winning The Invention of Hugo Cabret (the film version, Hugo, is due in theaters for Thanksgiving 2011 ) will also want to be Wonderstruck.