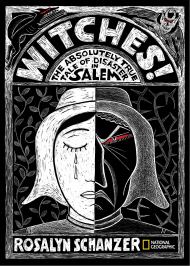 The madness began in February 1692 in the little town of Salem Village when two young girls began twitching and contorting their bodies into strange shapes and mumbling strange things, and over the next several months it spread like a virus to surrounding communities. By the time the mass hysteria ended in May 1693, more than twenty people had lost their lives, and hundreds more were left with ruined reputations. For over 400 years since, the Salem Witch Trials have captured the imagination of young and old alike, and Rosalyn Schanzer brings this terrifying event vividly to life through primary source quotations and a taut, suspenseful narrative. For the Puritans, the supernatural was as real as the natural world, and belief in demonic possession and witchcraft was near universal.

Schanzer explains how these notions enabled people to believe that their neighbors and relations were witches in league with the devil and led to the tragic executions of many of those accused. She also examines the causative theories behind the event, including deceitful children and teens vying for attention, covetous and vindictive neighbors spreading outright fraud, anxieties about recent hostilities with Native Americans, and spoiled food causing mass hallucinations. Schanzer's black-white-and-red scratchboard illustrations accentuate the creepy, chilling tone of the narrative. Witches! is a riveting, real life horror story that will have readers captivated and stunned.