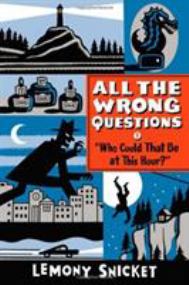 "Who Could That Be at This Hour?"

After recounting the tragic lives of the Baudelaire children in A Series of Unfortunate Events, Lemony Snicket returns to share an autobiographical account of his unusual childhood. Who Could That Be at This Hour? begins with twelve-year-old Lemony Snicket in the Hemlock Tearoom and Stationery Shop where two chaperones masquerading as his parents are trying to poison his tea with laudanum.

Lemony escapes from them to begin his apprenticeship for a shadowy organization under S. Theodora Markson, who is ranked dead last in skills, to Lemony’s joy. Why would he want an attentive supervisor who he can’t outsmart, anyway?

He and his chaperone travel to a town called Stain’d-by-the-Sea where the sea has been drained and the forest is, of course, without trees. They visit Mrs. Murphy Sallis, the client who gives them their first assignment: to investigate the theft of the Bombinating Beast statue from her mansion. A simple and easy task as she already knows who stole it—the Mallahan Family.

How does Mrs. Murphy Sallis know who took the statue? Why didn’t she call the police if she knows the culprit? These are all the right questions Lemony asks that S. Theodora dismisses—because she’s the chaperone and he’s the apprentice, as she often reminds him during the investigation.

Lemony and S. Theodora go to the Mallahan Lighthouse where they pretend to be a couple (Theodora’s idea). They meet Mr. Mallahan, who welcomes them into his home, and his daughter, Moxie Mallahan, who is an amateur newspaper reporter. Theodora distracts Mr. Mallahan while Lemony simply asks Moxie about the Bombinating Beast. She mentions the statue is cheap and shows him where her family stores it. Lemony notices it has been collecting dust for quite some time.

During the investigation, Lemony meets the eccentric townspeople in Stain’d-by-the-Sea: a sub-librarian, a taxi service run by two boys nicknamed Pip and Squeak, a husband and wife police team, and Ellington Feint, another person who is interested in the Bombinating Beast.

Why were Lemony’s chaperones trying to poison his tea? What does the S in S. Theodora Markson name stand for? Why are so many people interested in a cheap statue that the rightful owners don’t care about? Whether these are the right or wrong questions to ponder, Lemony Snicket may never answer them or may have you read the next book to find out.

All the Wrong Questions, a four-volume middle grade series, has the same droll humor that fans of A Series of Unfortunate Events would enjoy and offers tantalizing references to the infamous books, such as the mysterious organization Young Lemony apprentices for but never once mentions it by name (VFD, anyone?).

As for anyone who has never read A Series of Unfortunate Events—to which Lemony Snicket would agree is in the interest of your mental health—Who Could That Be at This Hour? engages new readers, including adults, especially after they read what Young Lemony has to say about the Lord of the Rings franchise…