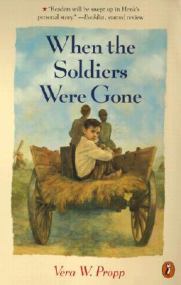 When the Soldiers Were Gone

At the end of World War II, in 1945, eight-year-old Henk's Papa calls him into the front room of their Dutch farmhouse and introduces him to two strangers. Papa says, "Henk, I have something important to tell you . . . These people are your mother and father." No, they can't be. Henk already lives with his parents who love him, though he knows he is different. When his brother and sister went to the village school each day, he stayed at home. Every time the soldiers came to the house during the war, he had to hide in a clothes hamper and not make a noise, though he was never sure why. Life was not so bad, though. He even had his own kitten, Kootje. The woman and man call Henk "Benjamin" and take him away from Mama and Papa back to town where they have an apartment and a baby named Carl, whom they say is his brother.

They try to explain that they left him with Papa and Mama during the war because they are Jewish, and they wanted him to live, but it's all so confusing.

Based on a true story, and told by an omniscient narrator, but using a child's perspective, the book is wrenching in its simplicity. Children will readily identify with Henk/Benjamin's slow adjustment to his new life after the war. The real Benjamin lived with his Christian farm family for 3 years, and was totally surprised to learn he had other parents. His Christian parents helped hide and protect many Dutch Jews.

Johanna Reiss's autobiography, The Upstairs Room, written for children, is a similar account of hiding on a Dutch farmhouse. Both are sensitive, personal accounts that younger children in grades 3 and up can begin to comprehend, as is Lois Lowry's Number the Stars.