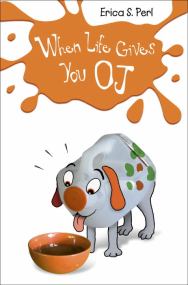 In the just-before-she-turns-eleven summer, Zelly Fried’s facing lots of changes: the family has moved to Vermont from Brooklyn; her grandfather – Ace – is living with them after the death of Bubbles, Zelly’s beloved grandma; her best friend Allie is off to sleep-away camp; and a new friendship begins with the even-newer-to-the-neighborhood kid, Jeremy.  But one thing’s been the same for Zelly: for always – she wants a dog of her own.  More than anything!

Of all people, Ace has a plan.  It’s a crazy plan, but Ace convinces Zelly that it might work.  In order to prove to her parents that she will be a responsible dog-owner, Zelly’s going to take care of a practice dog – an orange-juice container on a leash.

Schlepping an orange juice jug noisily through the streets of her town – three times a day! – is embarrassing enough. Add to that the fact that Allie hasn’t written her a single letter; her younger brother Sam sticks out like a sore thumb at the Fourth of July parade in his Batman costume; the class bully is giving her and Jeremy a hard time; and her parents don’t seem to be relenting even a little bit about getting her a dog, despite Zelly’s stalwart efforts. Things get worse when Allie finally comes home filled with camp stories and friendships that leave Zelly out.  More than ever, Zelly feels she’ll never belong – a frizzy-haired Jewish kid whose grandfather talks to her in Yiddish phrases – just doesn’t belong in this land of straight-haired blondes.

Zelly tells her story relating not only the many happenings of a transforming summer, but also allowing us into her thoughts.  She stands shoulder-to-shoulder with her middle-grade readers, speaking about their feelings and perceptions, even though circumstances are different.  It is this, and the author’s clear affection for and understanding of her character that makes When Life Gives You You O.J. a stand-out novel – a book sure to be enjoyed and embraced.

(And, yes, Zelly gets her own puppy in the end.  You’ll hear your kiddos cheering!)