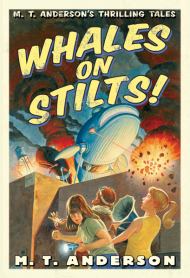 "On Career Day Lily visited her dad's work with him and discovered he worked for a mad scientist who wanted to rule the earth through destruction and desolation." Isn't that just the best first line? This is one of those high-powered Kids Save the World types of book, a postmodern farcical throwback to girl and boy heroes like Nancy Drew, the Hardy Boys, and Tom Swift. Lily Gefelty is a girl who, until now, has always considered herself too boring to ever do anything interesting. Her dad is blithely oblivious to the possible incongruities of his job-he's in Sales and Marketing and works in a highly guarded, high-tech, top-secret facility in an abandoned warehouse. Lily is aghast. "This is like some sort of mad scientist's laboratory. What do you really make here?" Dad tries to allay her fears, "We're a midsize company devoted to expanding cetacean pedestrian opportunities." Translation: they make stilts for whales. Stranger still, her father's boss, Larry, appears to have blue rubbery skin, wears a grain sack to cover his head, and seems to be planning to take over the world.

Lily's swell best friends, Katie and Jasper, are famous for their bravery and heroism, and even have book series based on their lives (the Horror Hollow series and Jasper Dash, Boy Technocrat, respectively). She asks them to join her to spy on the company, Deltamax Industries, and foil Larry's dastardly "Product Launch," where walking whales will destroy the town with their deadly laser-beam eyes. (And you thought whales were our friends.) With tongue cemented solidly in cheek, Anderson's gonzo sci fi satire takes us on a breathless, outrageous tear through product advertisements for Gargletine Breakfast Drink and Katie's latest book, Horror Hollow #215, and, of course, that anticipated vicious whale invasion, which Lily will try to stop just in the nick of time. Lemony Snicket fanatics will find much to like and laugh about.

Lily, Katie and Jasper Dash notice something strange is going on the morning of the biggest staring contest of the year. A million beetles are swarming the streets. It seems like an evil portent, but should they let it distract them from the big game against the Delaware team?

Or is it somehow related? Jasper and his team soon find themselves getting creamed inside the gymnasium. Katie, meantime, is spying on the Delaware Team Mom, and her suspicious dealings in the parking lot. It looks like she’s selling a bejeweled sacrificial knife and a model of a building with plastic spoons sticking out of its roof to the owner of the Pelt Museum (whose main exhibits typically have to do with butter churns).

But just as the deal’s about to go down, Katie’s mom pulls up and blows her cover. “Hey! Katie!... What are you doing crouched over like that?” The Team Mom whirls around and sees Katie!

The newest installment of the adventures of Jasper Dash, Katie and Lily are just as off-the-wall as the first, replete with terrifying Delawarians, the formal gallantry of Jasper Dash, the brave curiosity of Katie and the silent, suprising heroism of Lily. Footnotes and diagrams lend even more humor to the storyline, inserted at odd moments along the way and making for a delightful twist on the chapter book format for readers who will have never seen anything like it. It’s a terrific addition to Whales on Stilts and The Clue of the Linoleum Lederhosen.