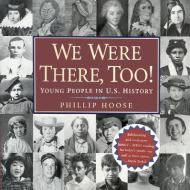 We Were There, Too!

If you are tired of history texts describing the accomplishments and wars fought mainly by white men, Hoose's riveting look at American history through the eyes of its activist youth is a revelation. Two to eight page profiles, based on primary sources, diaries, and interviews, along with reproductions of prints, paintings, and portraits, acquaint the reader with a diverse examination of 68 courageous children and teenagers who participated in groundbreaking events.

Starting with twelve-year-old Diego Bermúdez who sailed with Columbus in 1492, the text is divided into nine time periods, including the British colonies, the Revolution, Civil War, the West, and the wars of the Twentieth Century.

The final chapters deal with modern day heroes who encountered segregation (Elizabeth Eckford, one of the Little Rock Nine, the African American students who desegregated Central High School in Little Rock, Arkansas, in 1957), war (Arn Chorn, Cambodian refugee enslaved by the Khmer Rouge and forced into combat at age 12), AIDS (Ryan White, who went to court to win the right to attend school), and environmental pollution (Kory Johnson, who started Children for a Safe Environment at age nineteen after her nine-year-old sister died from heart problems caused by contaminated well water). All of the profiles are written in a conversational but dramatic narrative style that personalizes each young subject, often with first-person accounts, followed by a description of what happened to each later in life. Boxed sidebars add additional snippets of surprising and always fascinating facts and stories.

These profiles will serve to broaden your children's interest and knowledge of historical eras. They can analyze their own lives in the context of what is going on in the world around them today. In the classic picture book Miss Rumphius by Barbara Cooney (Viking, 1982), the title character's grandfather tells her she must do something to make the world "more beautiful." Ask your young citizens to think about what they plan to do to make a difference in their lives and the lives of others.

One of the profiles is of Claudette Colvin, the fifteen-year-old girl who was arrested for sitting in a "white" seat on a public bus in Montgomery, Alabama, in 1955, nine months before Rosa Parks' famous incident and the Montgomery bus boycott. Her testimony in a court hearing in 1956 helped lead to the federal court's decision that the city's segregation laws were unconstitutional. After years spent seeking out Colvin, Hoose finally got to meet and interview her, which became the basis for his recent riveting young adult biography, Claudette Colvin: Twice toward Justice, which won the 2009 National Book Award for Young People's Literature.

Hoose, Phillip. It’s Our World, Too! Stories of Young People Who Are Making a Difference. Little, Brown, 1993.

Murphy, Jim. A Young Patriot: The American Revolution as Experienced by One Boy. Clarion, 1996.