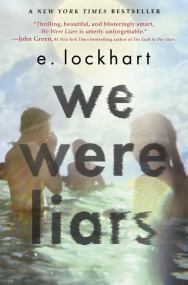 Cadence Sinclair Eastman’s family is rich--super-rich. Her grandfather owns a private island off the coast of Massachusetts (think: Nantucket but smaller) where she and the other Liars of the title – her cousins Mirren and Johnny, and Gat, the nephew of Aunt Carrie’s long-time boyfriend – spend their summers playing tennis, swimming, and eating meals prepared for them by servants whose names Cady never bothers to learn.

Yes, it would be easy to hate Cady Eastman.
But part of Lockhart’s skill in crafting this absorbing portrait of a family whose wealth informs and distorts the way they live is that Cady is ultimately a sympathetic figure: flawed, yes, but introspective and sensitive about important things. Readers get a sense of what she’s up against in the opening pages, when she is emotionally devastated to learn her father is leaving her mother for another woman. Her mother reacts to Cady’s freshly broken heart by telling her to get a hold of herself: “Be normal. Right now,” she instructs. Ouch.
Her parents divorce, however, is not close to being the most unsettling thing that happens to Cady during “summer 15” as she and the Liars call it. An unspecified accident on the island has left her with a brain injury, intense headaches, and selective amnesia. She misses so much of junior year that she has to repeat it. She spends summer 16, not with the Liars on Beechwood Island, but in Europe, with her father. Cady is adrift.
She tries to write her way to clarity, taking the fragments of memory she has left and weaving them into fairy tale settings. Her grandfather becomes the powerful king. Her mother and her two aunts are the king’s three beautiful daughters, who vie for his affection, and his treasure. Banishment is a real threat, there could be a curse at work. If this sounds a bit like King Lear, that’s because the fairy tale Lockhart is working from is “Meat Loves Salt,” the tragic story of a father who rejects his youngest daughter because he misunderstands the way in which she expresses her love for him. Scholars believe it’s the same tale that inspired Shakespeare’s play. For maximum impact, that’s probably all one should know before starting We Were Liars. There is a shocking twist when Cady finally recovers her memory of the events of “summer 15.” Like Cady, many readers will not see it coming so just a bit of advice: Have tissues on hand.