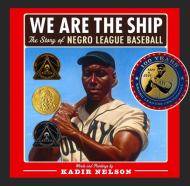 We Are the Ship

As handsome and riveting as any nonfiction book I've ever read, this imposing and stately sports book is unforgettable and spectacular. Enough adjectives for you? Until you hold it in your hands, you can't imagine the impact it will have, starting with the stoic gaze of Negro League superstar Josh Gibson in the painting on the red-bordered cover. Kadir Nelson's full-page oil paintings are beyond breathtaking. They make you feel like you know these guys, like you're right there in the stadium with them, or crammed in an old bus heading to the next town for a game, singing barbershop numbers. "Most people don't know it, but Satchel Paige had a wonderful singing voice, and so did Buck Leonard. We would listen to them and try to join in." Who's speaking? Kadir Nelson says in his Author's Note, "I chose to present the voice of the narrator as a collective voice, the voice of every player, the voice of we." It takes about a page before you figure this out, and then it feels like everyone is telling you stories about what it was like to be a Negro League player. It's colloquial, friendly, and sometimes shocking and heartbreaking. Did you know about the white baseball team owners' "gentleman's agreement" around 1887 to "do away with Negroes in professional baseball"? In 1920, along came a former player, Rube Foster, who decided to organize an entire Negro National League. The book's title comes from a quote by Rube about his teams: "We are the ship; all else the sea." There's a painting of him on page four, a preacher's son who called everybody "darlin."

The anecdotes, the history, the games, and, of course, the many glorious paintings make this a read-aloud that every kid (and adult) should experience. Ken Burns made a documentary about the Negro Leagues that got Kadir Nelson hooked on the subject, back when he was a student at Pratt Institute in the 1990s—it would be a natural companion to the book. (Look for Ken Burns' Baseball: Inning 5 - Shadow Ball, from 1994, which you can get online.)

Krull, Kathleen. Lives of the Athletes: Thrills, Spills (and What the Neighbors Thought). Harcourt, 1995.