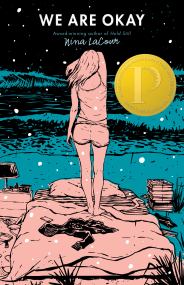 What would you do if you lost the person closest to you and then found out that the relationship had all been a lie?

Marin has left behind everything she has ever known and loved in San Francisco after the death of her beloved grandfather. Her mother died after a surfing accident when Marin was only three. With no family left and no desire to ever return home, Marin is alone on her college’s deserted campus over winter break. That is, until her best friend, Mabel, arrives for a three-day visit, bringing back memories, told through flashbacks that gradually explain Marin’s state of intense grief.

Marin is unable to articulate what drove her to depart so suddenly after all she and Mabel had been through. After months of ignored text messages and phone calls, Mabel still travels across the country to visit Marin, but she has an ulterior motive. She wants Marin to come home with her for the holidays and become part of her family. Marin cannot accept the invitation. Though she desperately wants to, she feels so deeply betrayed that she is convinced she may never be able to return home.

Nina LaCour, noted LGBTQ novelist and winner of the American Library AssociationBest Book for Young Adults” for Hold Still (2010), beautifully captures the complex emotions of an eighteen-year-old girl dealing with loss and discovering her own identity. While reading this story, one cannot help but continue on to find out what could have possibly happened in Marin’s past to push her to such drastic measures.

Parents should know that this is a wonderful coming-of-age story that deals with sensitive issues in a way that young readers will find easy to digest. Fans of Rainbow Rowell will enjoy. The message will open the door to conversations about love and loss. This story is relatable and lets young readers know that it is okay to be sad sometimes. And as the title suggests, THERE IS A HAPPY ENDING.

Piecing Me Together by Renee Watson

Love, Hate and Other Filters by Samira Ahmed

Little and Lion by Brandy Colbert