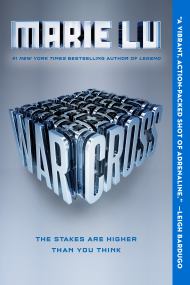 With WARCROSS, Marie Lu has written the ultimate book for video game-loving readers. The story takes place about ten years in the future where a virtual reality game called Warcross, created by teenage billionaire Hideo Tanaka, has take the world by storm. Players simply put on a pair of glasses to enter the virtual arena where they gain superhuman abilities, collect power-ups, and fight each other.

The main character is Emika Chen, a rainbow-haired hacker who is buried in debts. She takes a huge risk by hacking into one of the Warcross championship games to steal a rare power-up she can sell for an unimaginable amount of money. Her skills can’t keep her from getting caught, though, and soon her face is plastered all over the world as the criminal who hacked into the game. To Emika’s surprise, Hideo invites her to Tokyo for a very special mission. If she is a skilled enough hacker to break into one of the most high-security Warcross events, she can help find the mysterious Zero, who has been threatening Hideo and the Warcross games for some time.

Hideo believes that Zero is a member of one of the championship teams, so he puts Emika on a team called the Phoenix Riders as an architect to investigate. Architects help manipulate the landscape of the levels in the game. The rest of her team consists of:

Asher (Captain): Acts as the lead strategist of every match the team plays.

Ren (Fighter): Attacks the other team’s members during gameplay

Hammie (Thief): In charge of stealing items from the other team, as well as the other team’s “artifact” which is how they win the game.

Emika struggles to keep her secret about infiltrating the team while bonding with them enough to actually win games with them. She also slowly falls for Hideo as she spends more time with him. However, she continues prying into the team and the games as she tries to take down Zero and finds dark secrets readers will never see coming.

This is a fun YA book filled with a diverse cast of characters and a well-developed world. Readers will wish they can enter the book and play a game of Warcross themselves. Marie Lu, who used to work in the video game industry, has an interesting perspective on the world of gaming and it really comes across in her writing. This is the perfect read for techy readers who want a colorful, action-packed story.

“A vibrant, action-packed shot of adrenaline. Lu delivers characters with heart and determination, then sets them loose in a luminously conceived world of infinite possibility.”—Leigh Bardugo, #1 New York Times bestselling author of Six of Crows

“Marie Lu’s Warcross is unlike anything I’ve ever read—clever, smart, romantic—yet exploding with color, action, and unrelenting speed. I flew through this book—it’s absolutely fantastic.”—Sabaa Tahir, #1 New York Times bestselling author of An Ember in the Ashes