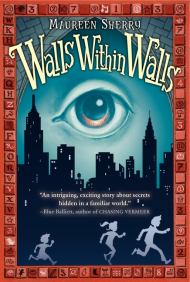 CJ, Brid, and Patrick Smithfork (ages twelve, nine, and six) are unhappy with the move from their love-worn Brooklyn home to a lavish Upper East Side apartment. This is the fruit of their father’s labor as a video-game inventor, but it is a world with which they are unfamiliar, and their parents no longer seem to have time for them. Things become infinitely more interesting when the siblings uncover a gigantic painting of an eye hidden behind a wall – an eye that is crying tears containing words in code. This is the first piece of an elaborate puzzle created in the ‘30s by packaged-foods magnate Mr. Post to lead his children to their inheritance. So far, no one has solved it.

The second piece the threesome find is a guide of sorts – a book of seven poems handpicked by Mr. Post containing meaning and memory for his children. With this start, CJ, Brid, and Pat, and readers along with them, become Treasure Hunters slash History Detectives: cracking codes, finding hints in poetry, and racing to New York City landmarks in search of clues. The characterizations and dialogue are on-target, capturing each child’s personality quirks, the typical sibling-snipes, and their loyalty to each other. Once the Smithforks identify and involve Mr. Post’s daughter Eloise, the hunt becomes colored with emotion. Through her, they begin to understand how wealth can also break families apart.

In this fast-paced, multi-layered debut mystery, families are mended and new friends made. For youngsters who wish to delve deeper, the author has provided a wealth of back matter about the sites and some of the historical figures, as well as a teaser about the next adventure for the Smithforks. (Fact or Fiction; List of Sources Consulted; After Words)