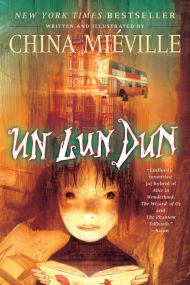 This bestselling dystopian novel by China Miéville takes place in UnLondon, a strangely familiar yet eerily different world than our own— a place where misfits and broken things end up and get a new chance at life. It is also a city on the brink of revolution, awaiting its long-foretold savior “the Shwazzy” to save it from the Smog, a sinister personified cloud of pollution.

When twelve-year-old girls Zanna and Deeba accidentally enter UnLondon through a secret passageway, it is immediately clear that Zanna is the answer to the prophecy. But when she fails in her very first battle against the Smog and returns home to London, it is Deeba who stays behind to finish what they started.

Un Lun Dun is a subversive and empowering story that is perfect for young, socially-conscious readers. Most obviously, there are many references to the harmful consequences excess waste. During one of the first scenes in the novel, Zanna and Deeba are attacked by sentient heap of trash that is both physically overwhelming and menacing. Later we find out that everything that is carelessly discarded in London finds its way into the streets of UnLondon. Also, the villain in this story is a cloud of smog that originated in London, survived the Clean Air Act, and only grew in strength once it reached UnLondon. Though the effects of climate change are increasingly more tangible, this novel can help young environmentalists better grasp the severity of and begin taking responsibility for this issue.

Also, the true heroine of this novel is Deeba, not the Shwazzy, but specifically the “unchosen.” Reading about a regular, imperfect, nonwhite girl who saves the day could be very beneficial to young women and girls of color who don’t often see themselves reflected as heroes in the books they read. It could also show all readers that one doesn’t need to be a “chosen one” to take action.

Ultimately, Un Lun Dun is a fun, propulsive, and compelling adventure that will both entertain and enlighten a new generation of socially aware citizens.

“It hardly seems possible that I didn’t read this novel and love it at age 12, it brought back so vividly the long, book-drunk days of my late childhood. Like the best children’s fiction, Un Lun Dun seems to have always been there waiting to be discovered. Finding it as a grown-up may not be the optimum way to stumble into UnLondon, but it’s pretty miraculous all the same.”—Salon

“Give [Un Lun Dun] to a kid (and borrow it when they’re done). It just might help them grow up into the kind of nerd we need a lot more of—one who thinks they can save the world with sheer ingenuity.”—Wired magazine