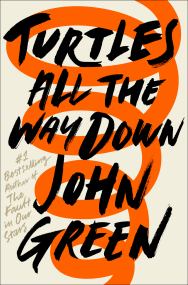 Turtles All the Way Down

Nominally, John Green’s first novel in nearly six years – his first since The Fault in Our Stars -- is about the search for a fugitive billionaire, featuring the creative, hyper-articulate teens Green’s readers have come to expect.

But strip away the witty repartee, the comic bits, or having to wear the Chuck E. Cheese costume at work, and what’s beneath is a heartbreaking story about mental illness.

Green has been open about his own struggles with anxiety. Part of the reason it’s been so long between books for him is that the phenomenal success of The Fault in Our Stars nearly paralyzed him.  He had become his own tough act to follow.

In Turtles, he meets the enemy head on, giving his main character, Aza Holmes, something akin to the panic disorder he is afflicted with. Aza has good reason to feel unsettled. When she was eight she saw her father collapse from a fatal heart attack while mowing the lawn.  Now 16, she is obsessed with bacteria, gripped with fear she’ll contract some sort of a life-threatening infection.

Though she’s been in therapy, and been prescribed medication she takes irregularly, Aza sometimes just cannot stop her thoughts from spiraling into an abyss. Some of these passages are difficult to read, imagine how hard it is to actually live this.

A standard feature of every Green novel is the sidekick who threatens to steal the show and that role here is played by Daisy, Aza’s best friend. Daisy hears on the news that a local billionaire, Russell Pickett, has gone missing just as police were closing in to arrest him on corruption charges. There’s a $100,000 reward for information on his whereabouts and it’s Daisy who suggests that his son, Davis, may know something. Daisy doesn’t know Davis but Aza does. The two met at “Sad Camp,” a summer program for kids whose parents have died. Aza had just lost her father; Davis, his mom. Though they bonded then, they haven’t seen each other since, even though they live close, on different sides of Indianapolis’s White River.

Daisy cooks up a scheme to get Aza on Davis’s property but could not have predicted what happens next: romance.

And that’s where Aza’s illness rears its ugly head. Because as much as Aza wants to be involved with Davis, her fears about germs and bacteria and illness won't let her.  The pressure cooker she’s been in ratchets up in intensity.

There is an honest ending that is not necessarily happy but is hopeful. Get help, Green is saying. It’s really important to learn how to cope when it seems like the world is careening out of control.

One of Us is Lying By Karen M. McManus

Once and For All By Sarah Dessen