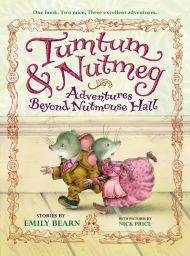 Mr. and Mrs. Nutmouse live in a thirty-six-room mansion called Nutmouse Hall, located in the broom closet off the kitchen of Rose Cottage, owned by a human widower named Mr. Mildew. Mr. Mildew, an inventor, is an absent-minded father to his children, Arthur and Lucy, and the house is in terrible disrepair. The mouse couple, whose pet names for each other are Tumtum (he loves to eat) and Nutmeg (because of her lovely nutmeg-colored fur), don’t think it right that they should live so comfortably while the human children eat food from tins, and shiver in winter because the boiler no longer works. “They need a fairy godmother to take care of them,” says kindhearted Nutmeg.

Tumtum proposes that they begin to attend to some of the little mouse-sized repairs for the children, like fixing their glasses and darning their clothes. Up to the attic they scurry every night, after the children are asleep, and they begin to set things to rights. They store their equipment in Lucy’s dollhouse. Each day the children wake to find things mended and cleaned, but they also discover tiny presents, like chocolate bars the size of raisins, under their pillows. They decide they must have either a fairy or a ghost living there, and write a note inviting their benefactor to tea. This, the mice know, would be impossible. “Humans could be so frosty toward mice—there was simply too much misunderstanding between the two species.” Instead, Nutmeg writes Lucy and Arthur a mouse-sized note explaining that she is a fairy of sorts, but that her magic powers would fade if they were to try to see her.

So begins one of the most delightful mouse adventures in ages. It’s really three novellas in one big book, illustrated in cozy black and white pen and inks, filled with mouse-sized details. While the children play a part in each escapade, it’s the mice that are center stage. In the first book, the mice must devise a way to get the children’s dreadful Aunt Ivy to leave. She’s staying there while her house is being fumigated for mice, and it’s only a matter of time before she notices the mouse activity in Rose Cottage.

There’s a third major mouse character in the book, General Marchmouse, the most memorable blowhard and troublemaker since Toad of Toad Hall in Kenneth Grahame’s The Wind in the Willows. The General is retired from the Royal Mouse Army but still lives for adventure and, especially, glory. In a Churchill-like speech, he declares, “We shall fight from the beams, we shall fight from the rafters!” In the second tale, “The Great Escape,” Marchmouse gets more than he bargained for when the children discover him, dressed in his underpants, in the dollhouse and bring him to school to live in a cage with the classroom gerbils. The Nutmouses must find a way to rescue him, which they do with the help of mouse ballerinas hopping on pogo sticks. In the third part, “The Pirate’s Treasure,” the mice go camping by the lake where rat pirates capture the bombastic General.

As a read-alone or a family read-aloud, or an all-school read, this riveting tale of resilient English rodents will be just the ticket. Children can construct a mouse house of miniatures that they make from found materials and pretend that the Nutmouses live inside.