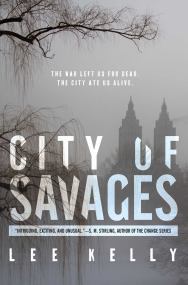 "The war left us for dead. The city ate us alive” These eleven words written across the beautifully grim cover of Lee Kelly’ stand alone dystopian young adult novel “City of Savages” sets the tone for one of, in my opinion, 2015s best young adult one offs. The island of Manhattan, New York City or just the city, as New Yorkers call it, has a length of 13.4 miles and a width of 2.3 miles at its widest point. Despite its actual size, it is the most densely populated city in the United States and after World War three, it becomes the perfect place for the Red Allies to establish their Prisoner of War camp. The Red Allies, comprised of Americas enemies take over the once great city after winning the third and possibly final world war. Fast forward twenty years and the greatest city in the world is hardly even remembered as such by those who were lucky enough to not only survive but still live in the ruins of the once great metropolis. Sky and Phee, two siblings who grew up in the chaos of the POW camp and have never known anything else. Yet, Sky knows there has to be better out there in the world and feels that he camp is nothing more than a cage trapping her and her family like animals. Phee on the other hand, the younger of the two siblings, embraces the madness and believes it to be all there is, she’s never known otherwise. The girls mother however, does remember time before the camp, before being prisoners but has the firm belief that the past should stay in the past. She never tells her daughters of what life was like before the great war and the downfall of New York. In camp, discipline is paramount and obeying the strict rules is the way to survive. Rolladin, the warden of the island runs a tight ship and her appointed warlords crack the whips any chance they get. When outsiders from England, a country the Red Allies have suppository destroyed arrive for the annual census, the only world the girls have ever known begins to crack as they are exposed to life outside of their camp and the possibility of lies being used to create it.

Couple this with the discovery of their mothers pre-war diary, the girls unabashed teenage curiosity and their questions begin running out of answers. After one if the islands warlords is killed the girls start to unravel the cries darkest secrets and along with their mother, must join a team of foreigners in the hopes of escaping. Through cannibal infested subways to the cults of the Meatpacking District we follow the girls on their quest to freedom in the past. that is, if they can make it out of the present.

“In Kelly’s debut dystopian fantasy, Red Dawn meets Escape from New York and The Hunger Games.  Kelly obviously knows her way around Manhattan, and her use of the subway (home to cannibals!) and other landmarks helps her create a setting that is all the more bleak and creepy for its being familiar. Expect to hear more from the talented Kelly.” (Booklist)

“Better hope you clear off your calendar when you start Lee Kelly’s City of Savages, because you’re going to be white-knuckle gripped from page one. . . . It’s a thrilling apocalyptic story, for sure, but Kelly also imbues her story with the powers of familial bonds and some seriously strong women.” (bustle.com)