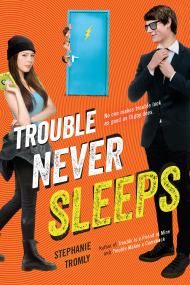 The third and final installment of the TROUBLE IS A FRIEND OF MINE series is just as wild as all of the other ones. At the end of the second book, Philip Digby came very close to solving the mystery of his missing sister. The only thing standing in his way is locating, stealing, and handing off his mother’s research from years ago. The only problem is that it is in a government facility that is heavily protected. Zoe and Digby have dealt with so much already, though, so what’s one more challenge?

One of the biggest changes in this book is that Zoe and Digby are officially a couple. They have the kind of amazing slow-burn romance that makes it worth the wait (two whole books!). The romance is really adorable, but at the same time, their dynamic doesn’t change much. They still bicker back and forth and joke around with each other constantly. There is just more kissing.

Despite the more romantic elements in this book, the mystery is still the core of the story. Digby, Zoe, and the rest of their gang are still plotting, running, sneaking, and executing crazy schemes. While the secondary characters, including Felix, Sloane, and Henry, do not play as big a role in this book as the previous two, their appearances are great and will make you nostalgic for the very first book. It’s amazing to see how much each of them has changed after all that they have been through.

There is an epic conclusion to this series, and if you have been reading, you are probably dying to know if Zoe and Digby find what they have been looking for. You will definitely be satisfied, and your heart will be pounding during the whole journey before the conclusion. The series is so good at blending mystery with high school drama flawlessly.

Finally, you may want to consider listening to the audiobook for this book and the rest of the series if you haven’t already. The English voice actress is the same actress who played Ash Ketchum in the original Pokémon anime dub and she does such a fantastic job of bringing these characters to life.