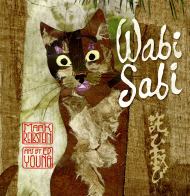 Wabi Sabi, a plain brown cat from Kyoto, Japan, is curious when she overhears a visitor ask the meaning of her name, and her master says only, "That's hard to explain." "It had never occurred to her before that wabi sabi was anything more than her name." So the cat sets out to discover the answer. She asks her cat friend, Snowball, and she, too, declares it hard to explain, but adds, "It's a kind of beauty." Rascal the dog tells Wabi Sabi she is ordinary, and a bird flying by advises her to seek out Kosho: "A wise old monkey / living among the pine trees / knows wabi sabi." Everyone's right-wabi sabi is not so easy to explain, but as Kosho says, "Simple things are beautiful," and that sums it up in a nutshell.

Each page features one haiku written in English, and each animal the curious cat encounters defines another aspect of the Japanese concept of wabi sabi. Each page also contains, written in Japanese characters, one or more haiku originally written by haiku masters, Basho (1644-1694) and Shiki (1867-1902). As in Ed Young's thoughtful picture book about China, Beyond the Great Mountains, this book opens top to bottom. It is illustrated with magnificent mixed media collages that integrate textured handmade paper, photographs, bark, pine needles, leaves, and other natural materials, fabrics, and watercolors. They epitomize wabi sabi, being neither fancy nor grand, but eliciting a feeling of contentment, harmony, and peace, as originally epitomized in the Japanese tea ceremony.