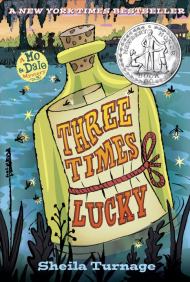 There’s plenty of buzz at the café when Tupelo Landing has its very first murder: Who would kill Mr. Jesse? Recounted in Mo’s colorful voice and with plot twists galore, the story gathers speed like a hurricane.

Each development is strategically placed to point suspicion elsewhere and deepen the mystery: Why do the police think that a bank-robbery many years ago in Winston-Salem is connected to events in Tupelo Landing? Why had stingy Mr. Jesse been secretly  donating money to the church? Why has the Colonel gone AWOL? Why has someone kidnapped Miss Lana?

Spunky Mo narrates, exhibiting a storyteller’s knack for descriptions, asides, and perhaps some small exaggerations. The setting and the cast of larger-than-life characters are so warmly represented, readers are apt to want to move to Tupelo Landing – or at least join the residents at the café for a Mountain Dew. With help from her best friend Dale, Mo does her own detective work to save the only family she’s ever known. And she’s had plenty of experience, what with all she’s done to try to find her “Upstream Mother.” With another storm brewing, Mo has to move fast. The author keeps track of  many strands and does not disappoint when the truth is laid bare. Mo is reminded that she is, indeed, lucky. So are the children who get to read this book for the first time – they’ll gulp this down faster than a cold Mountain Dew on a hot summer day.