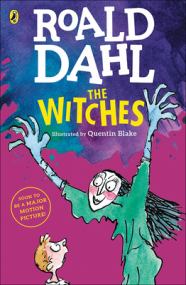 In fairy tales witches always wear silly black hats and black cloaks and they ride on broomsticks. But this is not a fairy tale. This is about REAL WITCHES. REAL WITCHES dress in ordinary clothes and look very much like ordinary women. They live in ordinary houses and they work in ordinary jobs. That is why they are so hard to catch."

According to the young boy narrator’s Norwegian grandmamma, real witches wear gloves to hide their curvy claws and pointy shoes to hide their square, toe-less feet; use wigs to cover their bald scalps; have pink, curvy nose holes for smelling out the stench of clean children; and have blue spit. For a bit of a vacation at the seaside, the boy, now seven and an orphan after his parents’ death in a car accident, and his grandmother check into the posh Hotel Magnificent. What does the child stumble upon when playing with his pet mice in a meeting room but the yearly meeting of the Royal Society for the Prevention of Cruelty to Children. But wait. These are not ordinary ladies. Alas, the group is actually led by the Grand High Witch and all of the other ladies are witches, too. They are meeting to hatch a hideous plan to turn all of the children in England into mice. When they catch the boy eavesdropping, they test out  their diabolical "Formula 86 Delayed Action Mouse-Maker" and turn the boy into a mouse.

Roald Dahl doesn’t play nice. His books have always featured the grotesque, the scary, the downright cruel—take Miss Trunchbull, the evil principal in Matilda who swings kids by their hair, or the giants in The BFG, who survive off “human beans.” Most of his villains have a common trait: they hate children (or, in some cases, reading). In his autobiography, Boy: Tales of Childhood, Dahl describes the bullies in grade school who forced him to warm the outdoor toilet seat for them. His school was testing grounds for the neighboring Cadbury factory, which sheds some light on the origins of his spectacular Charlie and the Chocolate Factory.

The Witches, first published in 1983, was banned in the US on and off throughout the 90’s for exacerbating the stereotypes of spinster women as hateful witches. But there is no question that this book serves a higher political purpose: to warn kids about the league of witches who aim to destroy every one of them because of the innate putrid smell of children. (To witches, clean children smell as vile as dog droppings.)

Quentin Blake, longtime collaborator of Dahl, illustrates these witches' bald scalps and eerie grins with scratchy pen-and-ink and watercolors. Since the book ends ambiguously, ask your children to propose what they think happened to the mouse boy. This one’s great to compare with the movie, with the fierce Angelica Houston satisfyingly typecast as the Grand High Witch.