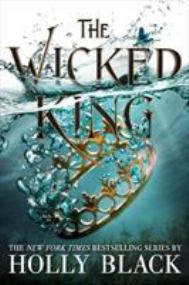 It has been five months into Cardan’s reign as king of Faerie and his promise to comply with all of Jude’s demands for one year and one day. From the peoples’ perspective, Cardan is doing a great job as king, but no one is aware that Jude is the brain behind everything. Between Faerie politics, training, and Cardan doing everything in his power to make Jude’s life difficult, Jude is being stretched thin, and she is running out of time.

To make matters worse, Jude learns the knowledge that someone who she trusts has betrayed her. She tries to work with the council of other Faerie politicians, but they don’t believe her. Jude must play the game of Faerie politics as THE WICKED KING goes on to ensure everything goes according to her plans to one day put Oak on the throne.

One of the best parts of THE WICKED KING is the ever-developing relationship between Cardan and Jude. They both continue to hate each other while simultaneously having feelings for one other. At one point, Cardan asks Jude for a kiss, and while she refuses, she hates herself for actually wanting to kiss him. As the book goes on, their feelings get more and more complicated and it makes an already great book that much better.

Jude is developed incredibly in THE WICKED KING, showing off her vulnerabilities and insecurities as well as her power. She continues to be morally gray while satisfyingly human as she thrives in the world of Faerie. The complexity makes her relatable which is one of the reasons this series is so good and has captivated so many readers.

Holly Black has shown time and time again that she is an extraordinary writer who not only knows how to put together a well-written, great-paced story, but also stun with plot twists that have been unknowingly foreshadowed throughout her books. She takes it to a new level in THE WICKED KING and the events are sure to leave readers breathless. This is an outstanding sequel that raises stakes and introduces new conflicts that set up for a final book that will no doubt be incredible and unlike any other series finale in fantasy YA.

*”A heady blend of courtly double-crossing, Faerie lore, and toxic attraction swirls together in the sequel to THE CRUEL PRINCE…Black’s writing is both contemporary and classic; her world is, at this point, intensely well-realized, so that some plot twists seem almost inevitable.”
―Kirkus, Starred Review

*”A rare second volume that surpasses the first, with, happily, more intrigue and passion still to come.”―Booklist, Starred Review