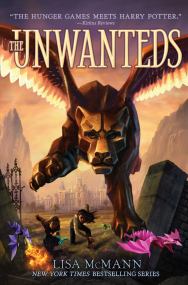 In Quill there are three types of people:  Wanteds, Necessaries, and Unwanteds. Wanteds, as their name suggests, are the most valued members of society.  Necessaries are tolerated for whatever menial skill they may possess.  And Unwanteds, typically those showing a flare for creativity and resistance to conformity, are put to their deaths.  Or so the Quillians think.

When the day of the purge arrives, identical twins Alex and Aaron couldn’t face more different fates.  Alex, deemed an Unwanted, is sentenced to the “Death Farm.” (Don’t worry – it sounds bad, but it’s described with a bit of mockery so that it comes off as more exaggerated than scary.  This is no Hunger Games Reaping.) Aaron, to his family’s great pride, is set on a path to become a member of the revered Quilitary (Quill’s military).

When Alex arrives at the Death Farm, he is in for a surprise.  Luckily, the magical Mr. Today has created an enchanted place called Artime for the Unwanted refugees not only to live, but also to develop their creative potential and thrive.  Alex gets to learn all kinds of artistic and magical skills.

And he will need all the training he can get. Quill’s strict rules start to deteriorate, and the magical spells that protect Artime wear off.  A battle between these contrasting societies becomes inevitable.  Will all of Alex’s hard work be enough to fight off the rigorously-trained Quillian army?  And, most importantly, will Alex be able to get through to Aaron and help him understand which side he should really be on?

The Unwanteds touches on sibling rivalry, right and wrong, the power of creativity, loyalty… and betrayal.  It’s all done with a light hand to make the story a great fit for middle-graders. With its wonderfully-imagined setting, fantastic creatures, magic spells and powers, it’s sure to delight those new to fantasy and is a good choice to read before Harry Potter.