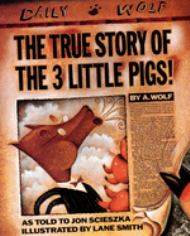 The True Story of the Three Little Pigs

Is it true that there are two sides to every story? If it is than “The True Story of the Three Little Pigs” is the perfect story to apply that logic to. “You thought you knew the story of the ‘The Three Little Pigs’… You thought wrong”, explains the wolf from “The True Story of the Three Little Pigs”. Right from the start this story makes you want to hear the story of the three little pigs told from the point of view of the wolf. According to the wolf, who’s actual name is, Alexander T. Wolf (Al for short,he was framed and tells all about the misunderstandings and mishaps that made him appear so guilty. Al is the unfortunate victim of circumstance and has been railroaded into a prison cell.  Rarely have I come across a children’s book that is so clever, and that helps children develop critical thinking skills in such a fun way. Author Jon Scieszka’s storytelling is comical and creative. Mr. Sceiszka’s words help the reader actually develop a little apathy for the wolf, which after the years and years of the wolf being seen as big and bad is saying something. Lane Smith’s illustrations are very unique and eye catching. It gives one the impression of a type of Kandinsky or a Picasso effect. The words and the illustration’s work together to tell a compelling, thrilling, and enjoyable book that children will want to hear, read, and look at again and again.

Grade 1 Up–Victim for centuries of a bad press, Alexander (“You can call me Al”) T. Wolf steps forward at last to give his side of the story. Trying to borrow a cup of sugar to make a cake for his dear old Granny, Al calls on his neighbors–and can he help it if two of them built such shoddy houses? A couple of sneezes, a couple of dead pigs amidst the wreckage and, well, it would be shame to let those ham dinners spoil, wouldn’t it? And when the pig in the brick house makes a nasty comment about Granny, isn’t it only natural to get a little steamed? It’s those reporters from the Daily Pig that made Al out to be Big and Bad, that caused him to be arrested and sent to the (wait for it) Pig Pen. “I was framed,” he concludes mournfully. Smith’s dark tones and sometimes shadowy, indistinct shapes recall the distinctive illustrations he did for Merriam’s Halloween ABC (Macmillan, 1987); the bespectacled wolf moves with a rather sinister bonelessness, and his juicy sneezes tear like thunderbolts through a dim, grainy world. It’s the type of book that older kids (and adults) will find very funny.
-John Peters, New York Public Library