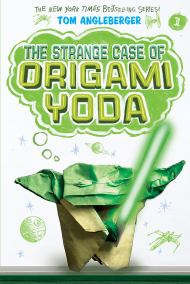 Tommy begins the first entry in his case file with this: "The big question: Is Origami Yoda real?... Does he really know things? Can he see the future?... Or is he just a hoax that fooled a whole bunch of us at McQuarrie Middle School?" To get solid answers and scientific evidence, Tommy has asked each person who was helped by Origami Yoda, classmate Dwight's paper-folded green finger puppet, to write down his or her account, which he has compiled here, along with his own analysis. He's also asked his friend, Kellen, to supply the many adorable cartoon doodles that decorate the margins of the crumpled notebook paper-like pages.

The first encounter with Origami Yoda happens on PTA Fun Night, when Tommy has finally decided to get up and ask Hannah to dance. Dwight, wiggling the little finger puppet perched on the tip of his index finger, says, in a squeaky voice that doesn't even sound very Yoda-like, "Rush in fools do." Tommy decides the statement means "Fools are in a rush," and stays where he is, which turns out to be good Jedi-wise advice, saving his butt, as he quickly recognizes. After that, everyone is eager for help from Origami Yoda. The only kid who doesn't actually tell his story for Tommy's case file is Dwight, himself, a weird, seemingly clueless kid who always ruins it for everyone, as his teachers put it. What's truly interesting is watching Dwight, whom we only see from others' disdainful points of view, and figuring out how he ticks.

This quirky, comical book has proved a huge hit with middle grade kids who wish they had an Origami Yoda they could ask for guidance in their dealings with friends, teachers, and the opposite sex. In the meantime, they can make their own Origami Yodas using Tommy's paperfolding instructions and diagrams at the back of the book, or print them out at http://www.origamiyoda.com, which also includes the author's blog and kids' responses to the book. As Yoda might say, "Paperfolding you must try."