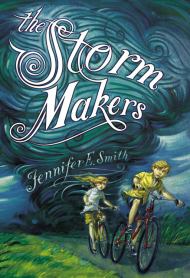 Simon has the potential to be a great weather caster – not predicting it, but literally creating weather depending on his mood. The question is whether he will use his powers for good or evil.

Ruby misses Chicago and her formerly close relationship with her twin, Simon. Although Simon and she are very different, he more outgoing while she is more logical, they have always been friends. But he’s been distant ever since their parents moved the family from the city to take up farming in Wisconsin – in the middle of a drought, no less.

Everyone’s anxiety increases as the temperature rises – what if they lose the farm? – but the very air around Simon crackles with static electricity. His bad moods seem to coincide with storms. Stranger still, Ruby sees an old man lurking around the barn who has a peculiar interest in Simon.

Otis, when he finally introduces himself, tells Ruby that he believes that Simon is a Storm Maker. What he neglects to mention is that the nefarious Rupert London, current head of MOSS (Makers of Storm Society) has also noticed Simon, and the two are in a battle for him.

Simon, as temperamental as any adolescent and as changeable as the weather, is desperate to develop his mysterious talent. While Otis uses a gentle hand to guide Simon towards the good, flashy showman London is all about the power. When Otis fails to teach him, Simon is lured to MOSS headquarters where London has perverted the mission of the agency. In the past, members used their abilities to manage storm-damage, but revenge-driven London is now bent on using MOSS to create an Armageddon – and he needs Simon’s powers to succeed.

The author, while working in an environmental message, perfectly describes the stultifying heat and the increasing irritability that accompanies it, underscoring the tests that each richly-drawn character must endure. Ruby, in particular, believably struggles with feelings of jealousy over Simon’s gift. She cannot understand why she, who can envision weather patterns and formations, cannot control them. But ever loyal, she does not abandon Simon even when he walks straight into London’s clutches. Like a storm, the action reaches a crescendo and in a satisfying twist, it becomes evident that Simon’s powers are only effective when he works in tandem with the more science-minded Ruby.