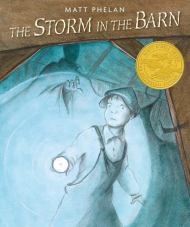 The Storm in the Barn

Starting with the reality of the Dust Bowl in Kansas in 1937, The Storm in the Barn is a graphic novel (meaning big comic book) about a boy named Jack and his family’s struggles to survive the drought and keep their farm. Bullied by the bigger boys, Jack doesn’t try to fight back. Upon seeing a looming dust cloud, the other boys retreat to the safety of the general store, but Jack tries to outrun it, heading for his neighbors’ recently abandoned barn. When he finds the door locked, he runs for home, where the town doctor is attending to Jack’s sickly older sister, Dorothy. Dust pneumonia is what she has, and she spends her days in bed, under mosquito netting to keep out the dust, reading books to Jack and their little sister, Mabel, about another Dorothy, the one who left Kansas for Oz.

Though the doctor worries that Jack has what he calls “dust dementia,” and Jack’s own father finds the boy useless, Jack has one supporter—Ernie, the owner of the general store, who tells him Jack tales to bolster his confidence. (What are Jack tales? They’re stories from English and then American folklore about an ordinary hero named Jack. You know at least one of them: “Jack and the Beanstalk.”) With the dust storms getting worse, the people turn to superstition, nailing dead rattlesnakes to fences to bring on rain and clubbing jackrabbits to death. At night, Jack sees light glaring from the barn, and the next day, he is able to get inside, where he finds an inexplicable puddle of water on the floor. It’s there that he will encounter the all-powerful King of Storms, whom he must defeat, just like Jack in tales of old, to bring the rains back to the wasted farmland.

If this title gets your young reader asking questions about the dust bowl, you might check out some of the startling photographs in Albert Marrin’s Years of Dust: The Story of the Dust Bowl and in Martin W. Sandler’s The Dust Bowl Through the Lens. Children who have never heard any stories about that stalwart fellow, Jack, (other than that one about the beanstalk), will delight in Richard Chase’s classic American folklore collection, The Jack Tales, which he compiled and published in the early 1940s, and Ray Hicks’s The Jack Tales. For real atmosphere, play some songs from Woody Guthrie’s “Dust Bowl Ballads,” which you can find at Amazon.com.