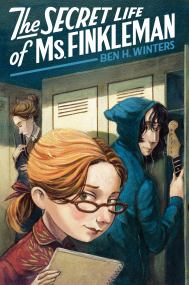 The Secret Life of Ms. Finkleman

Ms. Finkleman is not the most popular teacher at Mary Todd Lincoln Middle School; neither is she the least popular. In fact, the mousy music teacher sort of embodies the word "unremarkable." Meanwhile, in Social Studies, Mr. Melville announces "Special Projects," a class favorite. The assignment: solve a mystery in your own life. Bethesda Fielding has the best idea - to uncover who this Ms. Finkleman really is!

Bethesda finds a secret code in Ms. Finkleman’s office, and discovers it to be a set list from an old Chicago punk band her parents once loved. Using "excellent primary sources," Bethesda stumbles across an amazing secret. Ms. Finkleman WAS Little Miss Mystery, of Little Miss Mystery and the Red Herrings! With the teacher’s once-celebrity status revealed, Bethesda becomes somewhat of a celebrity herself.

As Ms. Finkleman begrudges her new role in the limelight, she must lead her class to win the Seventeenth Annual All-County Choral Corral. The task is daunting: during the first rehearsal, the rowdy bunch of middle schoolers spent the entire period picking out band names.

Just as the new-found interest in Ms. Finkleman’s life reignites the students of Mary Todd Lincoln Middle School's interest in class, this hilarious middle grade novel will charm kids and leave them wanting more from Ben Winters. Set in a surprisingly caring middle school community, The Secret Life of Ms. Finkleman says yes, middle school CAN be cool, as teacher and students rock out, side by side.