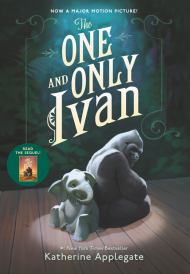 "The Ape at Exit 8" is Ivan, a mighty Silverback Gorilla, who lives in a circus-themed shopping mall. Based on a true story, but told in Ivan's own voice using simple language and short chapters, this is a story about friendship, compassion for animals, the promises we make, and the things we will do to help someone in need.

Ivan barely remembers his life before the mall. It's no wonder; he has kept track of the days since he arrived, and he's at 9,855 days to date. That's over 27 years. He barely remembers his twin sister, Tag (appropriately named for her favorite game to play with Ivan). He barely remembers what it's like to feel the touch of another gorilla, to be comforted by his family, or to feel the earth under his feet (rather than the cold cement that is his home now). But life isn't so bad for Ivan, or so he has convinced himself. He has some wonderful friends: there's Stella, the stoic elephant twice his size; there's Bob, the homeless-by-choice dog who sneaks into the mall every night and sleeps on Ivan's big belly; and there's Julia, the human daughter of George the custodian, who does her homework by Ivan's domain every evening and who shares a love of art with him. Yes, that's right: Ivan is an artist.

Before he was captured and brought to the US, Ivan's name was Mud. His parents chose his name because he loved to draw and used mud as his medium. In the shopping mall, Mack, the owner of the menagerie, provides Ivan with crayons and paper, but not simply in the name of art; Mack sells Ivan's drawings in the gift shop for $20 each ($25 framed, Ivan points out). Julia and Ivan share a beautiful connection, and in the beginning, it is Julia who realizes that Ivan is using his art to communicate with her. In the end, it is Ivan's art that will save his life and the lives of his friends at the mall.

When a new baby elephant named Ruby arrives to live with Stella, Ivan knows that Stella is dying due to a foot injury that was not properly tended to. Stella is unable to perform, and attendance has slowed at the shows. In an attempt to bring more folks in, Mack has bought Ruby. Once Stella meets her, she lovingly acts as Ruby's mother, and guides her through the fear and confusion caused by her new "home." Just before Stella dies, she asks Ivan to promise that he will find a way to rescue Ruby and make sure she does not die in the shopping mall.

It does not take Ivan long to devise his plan; he will use his art to tell Julia that the animals need a different home; they need to be in a proper zoo, with space and sunlight and others of their kind. After a few false starts, Julia finally understands, and she and her father take action to bring attention to the conditions at the mall. Once the general public realizes the gravity of the situation, officials are brought in, the mall zoo is shut down, and the animals are relocated to the local zoo. At first, the animals are all terrified of the change and sad to say goodbye. But Julia finds a way to make sure that everyone keeps in touch, and while things will never be the same, Ivan, Ruby, Bob and Julia know that they are each happy, healthy, and loved for the rest of their lives.

This is a moving, and ultimately joyful, story that will be appreciated by anyone who loves animals. The wonderful characters (both animal and human), the lesson of compassion for animals, and the message that one being can affect momentous change combine to make this a perfect book for any age. It is a terrific read-aloud for younger children, a perfect transitional book for newly-independent readers, and simply a great feel-good story for stronger readers. Highly recommend!