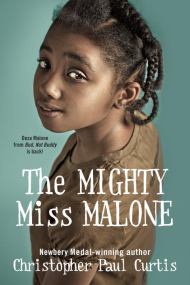 “Historical fiction” is not a phrase one can use to tempt every kid to a particular book, but Curtis has honed a method of making the events of yesteryear read like contemporary stories. His kids are flawed, funny, and real; he does not look away from the hardships of life “back then,” but the voice he uses to tell his tales is always a storyteller’s. Even when the history he’s revisiting is particular ugly – slavery, discrimination, poverty – Curtis understands that the only way to make sure his readers hear the important details is to deliver it in a package that also entertains.

His latest novel is no exception. The title character, Deza Malone, made a brief appearance in Bud Not Buddy, for which Curtis won the Newbery Medal in 2000. Except for their setting – the American Midwest during the Great Depression – the two stories are not linked. Curtis shaped a story around Deza, who washes dishes with Bud at a hobo camp, in response to pleas from female readers that he write a novel about a girl for once. He also had some explaining to do to moms who read Bud and wanted to know why in the world a proper girl like Deza had kissed Bud when she barely knew him!

“Boys lie all the time,” he told them. “You’re just getting his side of the story. She has a completely different take on what happened.”  In The Mighty Miss Malone, Deza gets her say.

A straight-A student, Deza lives with her loving parents and her older brother, Jimmie, in Gary, Indiana. It’s 1936; the economy is still in a tailspin. Her father is already out of work when, in an attempt to catch fish for dinner, he nearly dies during a boating accident on Lake Michigan. Injured and with fewer job prospects than ever, Roscoe Malone decides to return to his hometown of Flint, Michigan, hoping he’ll find work there.

But Deza’s mother loses her job shortly after her husband heads north, putting the Malones on the street. “One day you’re living in your own home . . . the next day you’re carrying everything you own in a blanket,” Deza says, “shooed from one place to another like a fly.”  Deza, Jimmie, and Mrs. Malone must make their way to Flint and hope Roscoe has found work and a place for them to live. Though the story is set nearly 80 years ago, the details read like a story you’d see in the news today:  unemployment, followed by foreclosure, followed by a close-knit family torn apart.

In his author’s note, Curtis writes that he hopes readers will use Deza’s story “as a springboard” to think about poverty, letting this plucky 12-year-old stand in for an estimated 15  million American children who “go to bed hungry and whose parents struggle to make a dignified living to feed and care for them.” Deza’s story ends, if not happily, then hopefully. That’s the outcome he wishes for all the real children out there now who face equally dire circumstances.