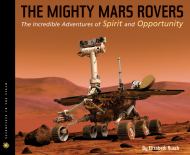 The popularity of everything from 1960s TV shows about Martians to more recent films about aliens proves that most of us are curious to know if there is life in outer space. The answer may lie on Mars. While we celebrated NASA’s launch to Mars in 2011 of the appropriately named Curiosity (it landed August 2012), the search began in earnest in 2004 when Spirit and Opportunity landed on Mars. The story about the creation of these tough little rovers is as amazing as their findings.

This stunning book, beautifully designed and chock-full of incredible images, outlines the conception, development, and implementation of the Mars Exploration Rover Mission. Fluent, engaging text is made exciting by the seamless inclusion of quotes from the team members who built the rovers, especially team leader Steven Squyres, leaving readers feeling as invested in and connected to Spirit and Opportunity as the team. The perseverance and creative thinking needed to complete the mission is inspiring. Nothing like the rovers had ever been developed before. And the demands were great. The rovers not only had to survive landing but withstand extreme conditions on the surface: difficult terrain, radiation, windstorms, and cold temperatures that commonly hit 75 degrees below 0! Upon arrival, scientists insisted that the rovers be able to handle any number of tasks, so they were loaded with equipment including cameras, microscopes, drills, and weather stations. Despite tense moments when the rovers malfunctioned or lost communication, the team was always able problem-solve long distance – sometimes by heading to Home Depot to purchase materials to help them recreate conditions.

The team’s persistence paid off. The rovers have been sending back panoramic images, soil analysis, weather conditions, and maps. They climbed mountains and descended into craters, covering far more territory than the team had ever expected. Most amazing: the team had hoped the little machines would last three months but they have trekked for more than six years! The team lost contact with Spirit in May 2011, but Opportunity continues to rove. Children can continue to follow Opportunity’s progress by visiting www.marsrover.nasa.govSome may decide to do more and aspire to become space explorers themselves!

DeCristofano, Carolyn Cinami. A Black Hole is NOT a Hole. Charlesbridge Publishing, 2012.

O’Brien, Patrick. You Are the First Kid on Mars. Putnam Juvenile, 2009.