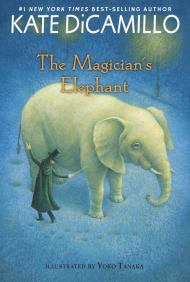 In the city of Baltese, Peter Augustus Duchene, a ten-year-old orphan, is sent to the open air market for fish and bread. Instead, he spends his only florin to ask a question of a fortuneteller. She tells him this: "Your sister? That is your question? Very well. She lives . . . You must follow the elephant. She will lead you there." This answer is, of course, preposterous. There are no elephants in Baltese, but, as the fortuneteller says, " . . .the truth is forever changing." Peter lives at the Apartments Polonaise with Vilna Lutz, an old soldier, who served in the army with Peter's late father. Vilna Lutz, who spends his days drilling Peter in the work of soldiering, has always insisted that Peter's sister was stillborn. Could she still be alive?

That evening, at the Bliffendorf Opera House, a magician of "advanced years and failing reputation" intends to conjure up a bouquet of lilies, but instead brings forth an elephant that crashes through the ceiling and lands in the lap of a noblewoman, crushing her legs. Both the magician and the elephant are imprisoned. In the nearby Orphanage of the Sisters of Perpetual Light, a six-year-old orphan girl dreams of an elephant. Dreams, memories, lies, magic, the impossible, love, hope, and the question "What if?" will lead Peter to the elephant and his lost sister, Adele.

As always, with a DiCamillo book, there is much to ponder and many plot threads that come together through coincidence and magical realism. There are sentences just waiting to be discussed: "Looking out over the city, Peter decided that it was a terrible and complicated thing to hope, and that it might be easier, instead, to despair." (page 51) "It is a bad thing to have love and nowhere to put it." (page 122) "The world cannot be changed.