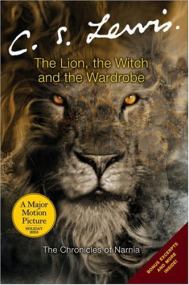 Peter, Susan, Edmund and Lucy evacuate London during the Blitz of World War II to live in a Professor Kirke's house on the English countryside. One rainy, dull day, while playing hide and seek in the house, Lucy falls through the back of the wardrobe in which she chose to hide, and into a snowy forest clearing. A faun named Mr. Tumnus clops by and drops his groceries in surprise at seeing a human(a human, he soon recognizes, who is one of the four destined to overthrow the evil White Witch). Though Lucy returns to her brothers and sister with this regal news, they shrug her off as a liar.  The four soon all stumble upon Narnia, and rise to the challenge of rallying the creatures of Narnia to battle for freedom.

Lucy, the youngest, is berated for telling lies about a magical wardrobe by her brother Edmund, who is eventually captured by the White Witch for his own deceits). Thousands of magical creatures side with what is right and prepare to battle the evil witch. But Lewis' morality never comes off as heavy handed or didactic. The good humor of the talking animals found around every tree and cave in Narnia, and the rich descriptions of this new world, throw a cloak of majesty over the four British children's arguments and smallest minutiae of being a kid.

While reading the book, put your children to work in the kitchen and have them come up with their own version of Turkish Delight (Brits: most Americans don't know of the candy! It's fun to see their versions from just the description in the book.). Readers can follow TLTWATW with the book's prequel, which was published later, The Magician's Nephew, as the sixth in the series, or the whole of the books in the Chronicles of Narnia series: Prince Caspian: The Return to Narnia, The Voyage of the Dawn Treader, The Silver Chair, The Horse and His Boy, The Magician's Nephew, and The Last Battle. Kids who love adventure will eat up the whole series. Many will advance to J.R.R. Tolkien's Lord of the Rings trilogy, which bears similar magical tones but clashing themes, as the two authors often exchanged  and debated ideas.