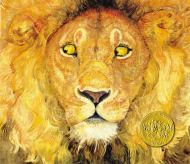 The Lion & the Mouse by Jerry Pinkney was the winner of the 2010 Caldecott Medal, the highest honor for children’s books.  This unique children’s book is a wordless reimagining of one of Aesop’s most famous fables in which a ferocious lion plans to eat the timid mouse that woke him from his nap, but the lion has a change of heart and lets the mouse go.  Later when the Lion is caught in a poacher’s trap the mouse chews through the trap and sets the lion free, proving that what goes around comes around.

Pinkney is an award-winning artist and chose to tell this famous fable with no text.  Though at first this may seem strange, no aspect of the story or its moral is lost by this artistic choice.  The cliché, a picture is worth a thousand words, holds true in the case of The Lion & the Mouse.  Pinkney’s stunning illustrations of the African landscape and the care with which he has drawn out the characters in the fable deliver.

Since the book is solely illustrations the only text readers are presented with is Pinkney’s author note, where he states: “For me, this story offers far more than a simple moral of how the meek can trump the mighty….I’ve come to appreciate how both animal are equallylarge at hear: the courageous mouse, and the lion who must rise above his beastly nature to set his small prey free.” This sentence sums the book up well, and the moral that kindness is important and never wasted but rather returned is something that children (and adults) should be reminded of often. Perfect for preschool age children, The Lion & the Mouseis an incredibly special book that young readers are sure to love.

* “A nearly wordless exploration of Aesop’s fable of symbiotic mercy that is nothing short of masterful… Unimpeachable.”―Kirkus Reviews, starred review

* “Pinkney’s luminous art, rendered in watercolor and colored pencil, suggests a natural harmony… The ambiguity that results from the lack of words in this version allows for a slower, subtle, and ultimately more satisfying read. Moments of humor and affection complement the drama. A classic tale from a consummate artist.”―School Library Journal, starred review