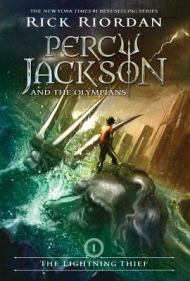 “Look, I didn't want to be a half-blood.

If you're reading this because you think you might be one, my advice is: close this book right now. Believe whatever lie your mom or dad told you about your birth, and try to lead a normal life.

Being a half-blood is dangerous. It's scary. Most of the time, it gets you killed in painful, nasty ways.”

Who could stop reading after a first page that starts like that? You think you have problems in school? Meet 12-year-old Percy Jackson, a dyslexic ADHD kid at Yancy Academy, a private boarding school for troubled kids in upstate New York. The chapter headings are most instructive and, actually, accurate, as in Chapter 1: "I Accidentally Vaporize My Pre-Algebra Teacher." On his sixth grade class field trip to the Metropolitan Museum of Art in New York City, Percy tries to stay out of hot water. But redheaded kleptomaniac classmate, Nancy Bobofit, pushes all his buttons and makes him mad. After he pushes Nancy into the museum fountain, Mrs. Dodds, Percy's inhumanly mean math teacher, wants to kill him. Literally. And Percy is about to find out the truth about the father he's never met. "Lost at sea" is all his mother has ever told him. Well, Percy's father is a god. A Greek god. A real one. And that makes Percy a demigod, a half-blood. He's also in mortal danger. There are lots of creatures out there who want him dead.

Readers will be eager to delve into Greek myths to understand Percy’s many encounters with gods and goddesses in modern day dress in this first book of a riveting five-part series, Percy Jackson & the Olympians. The fun continues with The Sea of Monsters, The Titan’s Curse, The Battle of the Labyrinth, and The Last Olympian. Both Rick Riordan's own website, www.rickriordan.com and the Hyperion site, www.percyjacksonbooks.com, are fabulous and not to be missed.