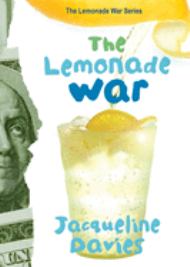 Evan Treski has been feeling angry and humiliated ever since he found out that his little sister Jessie will be skipping third grade. “You ruin everything . . . I hate you,” he tells her, even though he really doesn’t. Evan has always been her friend and protector, and Jessie can’t understand why he’s not happy she’ll be joining his fourth grade class in September. Jessie is great at reading and math and academics, while Evan is not. On the other hand, Evan gets along so well with everybody, and Jessie often doesn’t comprehend how other people tick. When Evan pairs up with a friend he doesn’t even like to open a lemonade stand without her, Jessie enlists the help of fourth grader Megan, a girl Evan secretly likes, and the two girls go into the lemonade business, too. The increasingly cutthroat competition between Evan and Jessie leads to a bet: whoever makes the most money by Saturday wins the loser’s earnings as well. The children’s mother is a public relations consultant who has written a booklet called “Ten Bright Ideas to Light Up Your Sales,” and her many useful pointers help them develop their selling skills. In alternating chapters told by a limited omniscient narrator, we follow each of the two siblings as they compete, undersell, go global, negotiate, and undertake malicious mischief against their competition.

Each fast-paced chapter starts off with the definition of a marketing term that figures into and foreshadows the plot. Learning about economics is a thirsty-producing enterprise, so mix up some frozen lemonade with your kids, calculate the costs together, and sample the goods. Pair this with Lunch Money by Andrew Clements, another enjoyable novel about business and competition.