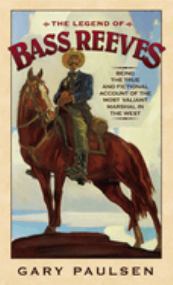 The Legend of Bass Reeves

If you still idolize Wild West men like Billy the Kid, Butch Cassidy, Wyatt Earp, and Kit Carson, author Gary Paulsen will soon set you straight. In his Foreword, he smokes out all of these icons as racist, thieving, shiftless cowards, chronic alcoholics, and outright thugs. In their place he offers up a true hero, an African American man named Bass Reeves, born a slave in 1824. Reeves was a legendary U.S. marshal in the Indian Territory, now Oklahoma. Paulsen's engrossing, matter-of-fact narrative and biographical portrait is true to life, if not all completely factual. With little information known about Reeves's childhood, Paulsen fleshed it out plausibly with dialogue and anecdotes partly based on the author's own experiences "riding, hunting and living rough in the West." The result is an adventure story that's like so many of Paulsen's other books-impossible to put down. His book exemplifies what historical or biographical fiction is-a melding of fact with the author's own take on events that did or could have really happened.

Here's what is known about Bass Reeves. He was born a slave on a Texas homestead in 1824. He ran away as a teenager to the Indian Territory, now Oklahoma, in 1840 and lived with the Creek Indians until 1863. He became a cattle rancher, married twice, and raised more than 10 children. In 1875, at age 51, Reeves was appointed a deputy federal marshal to Judge Parker, known as the Hanging Judge, to help bring to justice the gangs and outlaws terrorizing the Indian Territory. The legendary U.S. marshal captured thousands of fugitives; killed 14 men in the process, though he claims he never shot first; and accepted the job of town constable of Muskogee, Oklahoma in 1907, when he was 81. Must've been quite a guy.

What kids will love about the novel is meeting Bass Reeves as a boy, learning to ride and shoot, playing cards with the mister, his master, and winning. When he shoots the drunken sot in self defense, he must run for his life. There's lots of Paulsen's usual blood and guts from a Comanche raid early in the book and from Bass's shootouts with outlaws later. The testosterone's poured on heavy and thick, which your boys especially will appreciate.

Look for other historical or survival stories by Paulsen, such as Hatchet, The Haymeadow, Nightjohn, and Tucket's Travels. Both of Russell Freedman's photo-filled nonfiction books, Children of the Wild West and Cowboys of the Wild West, parallel the timeline of Bass Reeves, who lived from 1824-1910.