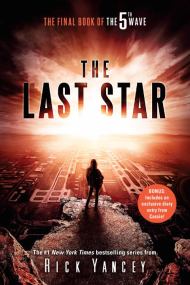 THE LAST STAR is the final book in THE 5TH WAVE series. At the start of the book, Ben, Cassie, Evan, Sam, and Megan are all united, while Ringer is still missing from the group. This story opens with Ringer’s perspective, reminding readers of her new super-human abilities, and of her new drive to kill Evan Walker. Ben makes the decision to break up from the rest of the group to see if he can find Ringer, splitting the group up again. As readers have learned from the previous books in this series, this might not be the best idea.

Fans of the series will be happy to know that this book is filled with just as much action and tension as the previous two. What makes this book unique in the series is how much more knowledge of the world readers have at this point. The concept of “aliens taking over the world” is mysterious in the first book, but by this book, readers can quickly finish the puzzle of this dystopian world’s complete picture. In fact, by the end of the book, readers are given a very satisfying explanation of why everything is the way it is in this world.

It is incredible how much all of the characters have grown since the first book. Cassie, in particular, feels especially grown-up in this book. Unfortunately, some of the characters in the series never get to experience satisfying character growth because they die too early. This book is no exception to that. There are a lot of injuries and deaths, so it is not for the faint of heart.

THE FIFTH WAVE series remains a socially aware story that touches upon themes of politics, environmental consciousness, foreign relations, and war. However, this book in particular highlights themes of friendship, love, and what it means to be human. These are common themes in dystopian novels, but this series handles them in such unique ways. Cassie and Evan’s relationship is among the most profound relationships in YA literature.

If you’re reading this review, you have probably already read the previous two books in this series, and nothing should stop you from finishing this final book. You will definitely be satisfied with everything that it offers from the character development, to the action scenes, to the romantic moments, to the immensely satisfying conclusion.