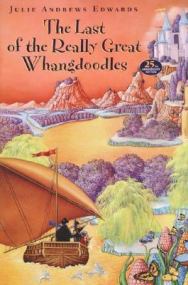 The Last of the Really Great Whangdoodles

Lindy, Thomas, and Benjamin, three ordinary siblings, ages 7 to 13, are at the zoo when they first encounter Professor Savant. You'll excuse me for butting in," he says to them. "But if you're looking for something really unusual, have you ever considered a Whangdoodle?" According to the professor, the Whangdoodle, a "fanciful creature of undefined nature," once lived in our world. It was wise, kind, and fun-loving, until people stopped believing in it. That’s when it created its own magical world and disappeared there. The children persuade Professor Savant they are worthy of accompanying him to Whangdoodleland to seek out the elusive creature, and he begins training them to sharpen and use their imaginations, the only way one can gain entrance. When the Slippery Prock, who is the Whangdoodle’s Prime Minister, discovers that the children and the professor are planning to visit Whangdoodleland, he tries to stop them with trap after trap, but the plucky children prevail. Once there, they encounter fantastical animals including the Whiffle Bird, a mob of Swamp Gaboons, and the High-Behind Splintercat. Vivid descriptions of each unusual beast should inspire children to strap on their own homemade “scappy caps,” rev up their imaginations, and draw portraits of each creature as it is introduced in the story.

Other books by the author that children will enjoy hearing aloud or tackling on their own include Mandy, about a ten-year-old orphan who discovers an abandoned cottage beyond the walls of the orphanage where she lives and makes it her own special place; and The Great American Mousical, written with Julie’s daughter, Emma Walton. Based on Edwards’s extensive knowledge of classic Broadway theater, this entertaining New York City adventure is about a troupe of mice planning a New Year’s Eve production in the basement of the about-to-be-demolished Sovereign Theater when the tempestuous and temperamental leading lady, Adelaide, disappears.