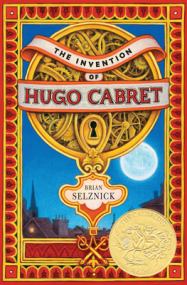 The Invention of Hugo Cabret

Brian Selznick, who won a Caldecott Honor for his spectacular illustrations in Barbara Kerley's extraordinary biography, The Dinosaurs of Waterhouse Hawkins, has written and illustrated a wholly original, innovative and breathtaking masterpiece that bends all the rules of novel writing and illustrated stories. And it was just awarded the prestigious Caldecott Medal as the most distinguished illustrated book of the year. Part One is composed of crosshatched and shaded pencil drawings, double page spreads centered on a black background.

First we see the moon and then watch sun rise over Paris. Page by page, we zoom in closer, like a movie, into a crowded train station where we watch a boy slip surreptitiously behind a grate in the wall. Next we observe a bearded older man sitting behind the counter of his toy booth, and notice the boy peering out at him from behind the face of a huge clock in the wall.

Not until page 46 do the pictures give way to text, and we discover the boy’s name: Hugo Cabret. When Hugo tries to steal a little blue toy mouse, the old man catches him and apprehends, in return, Hugo’s priceless notebook, filled with sketches of an automaton, a mechanical man built out of clockworks. Who is this 12-year-old boy who secretly winds all 27 clocks in the train station each day, lives alone in the walls of the train station, and no longer attends school? And who is the old toymaker whose granddaughter befriends Hugo and says she’ll help him get his notebook back? Your children who think they can’t read a long book will be inspired to try this one, as fully half of the story is told in pictures. Go to www.theinventionofhugocabret.com to play Selznick's interviews with NPR and with ExpandedBook.com, listen to him reading a chapter, and view a narrated version of George Méliès’ famous silent movie from 1902, A Trip to the Moon, which figures in the story. In school, children love to do take-apart units in science, where they use tools to dismantle old clocks, radios, and broken machinery to see how they work. You can do this at home, too, provided your kids know they’re not allowed to take apart anything you still want.